This Blog Turns 2 on Tuesday 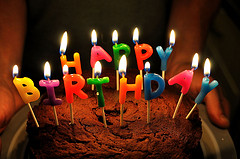 On 24 January 2010 I registered the URL www.NatesEbookNews.com and launched a blog. In the 2 years since I’ve broken dozens of stories, ferreted out a large number of secrets,  and became the site that TechCrunch called "pretty much the best source online for ebook news". It’s been  lot of fun, and the coming year will be more of the same.

I know that it’s common for blogs to celebrate anniversaries by giving away gadgets, but the end of January is too close to Christmas and CES. I’m not sure anyone would be interested. But I will be giving away all the swag I picked up at CES 2012, including:

BTW, I’m merely delaying the gadget giveaway, not skipping it. I am saving the really big celebration for mid-March. I have the good fortune to have 2 anniversaries due to the fact that I changed the name of the blog in mid-March 2010 to The Digital Reader. And since I get to choose, I’m going with the later date as the official anniversary.

Stay tuned. With luck I should be able to give away at least a couple toys you won’t find elsewhere.

image by Will Clayton

Maybe connectivity isn’t as important as I thought

Amazon is Getting Those 180 Thousand Kindle Exclusive eBooks Damned Cheap

I for one am extremely grateful for TDR – it is my primary source for any information on the subject of digital publishing – your selection of topics and writing makes it a daily pleasure. I am frankly a little jealous. Be careful though, I think that "Nate the Great" moniker might stick (if we have any say in it).

Thank you and happy anniversary.

P.S. So who is Nate??…I think that it is time for your faithful readers to know more about you (a photo?)..what drives you to spend hours blogging on this subject.

[…] No Comments · blog maintenanceI’d like to thank everyone who entered the contests earlier this week. Surprisingly, more people wanted the USB backup battery than other prize.( I would have gone for […]