This Could Be (Is) The Future of Digital Comics 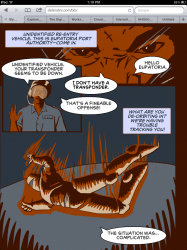 I was in San Francisco last week attending the Books in Browsers Conference, and there’s this one concept demo that I’ve been wanting to share with you ever since I saw it.

Pablo Defendini of Open Road Media showed off a project he’d put together over the weekend. It uses CSS and HTML to generate digital comics on the fly.

I want you to go look at it first. It doesn’t work on all browsers (IE is completely broken), but you should be able to see a functional design in iOS, most Android tablets, and it seems to work correctly in Firefox. Go here:

Look at it in landscape and then look again in portrait mode. Keep an eye on the word balloons and where the individual frames are placed. Did you notice how they shift slightly? That is what I thought was so shiny. 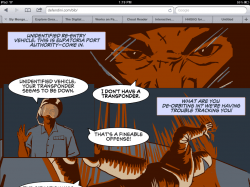 BTW, if all you have is the PC browser that you’re using right now you can still see the formatting tricks. You can also make the browser window really thin, to trigger the layout optimized for mobile phones. Then make it wider and refresh the screen.

The frames, word balloons, and text are each placed using CSS. The position of each element will change based on your resolution and screen width. That means no 2 screen sizes will have the exact same design.

I like this design because it’s the first time that I’ve seen a digital comic that changes to fit the width of the screen and is still legible afterwards. Everything else involves zooming, and that means that the text is often too small to be read.

Actually, I would go so far as to say that this is the first true digital comic that I’ve ever seen. All the comics I’ve seen before don’t qualify as digital comics; they’re just a collection of page images. Take apart a CBZ file and you can view the "comic" in a photo viewer. That makes it as a digital comic about as much as a text file is as an ebook.

But there’s also a downside. This concept probably has a higher CPU cost than the static page images, and it might also require more bandwidth. But maybe not; this demo massed 1.7MB, and a single page image wold almost certainly take up more space (becuase it has a higher resolution).

The other downside is that following through on this concept would likely require reversing the comics workflow.  A lot of comics are currently made paper first, with the directed viewing of the digital comic added afterward. This concept requires digital comics to go first.

But reversing the comics workflow is also an upside because it frees the designer to do more creative works. Also, adding the print step would not require all that much extra work once you’ve developed the digital workflow. And (I like this one) this digital-first workflow would also make it easy to scale a comic to fit multiple print sizes. If you want to go from a floppy to an 8.5×11 bound copy, you could do it fairly easily by using a tool to specify the dimensions and then tweaking the layout. The exact or relative dimensions don’t matter anymore.

The other upside of this digital comic design is that the text in  the comic is actual text, not an image. That means that it’s searchable as well as translatable. You could support 5, 10, or even more languages from a single file (just so long as you add the alternatives while you creating the digital comics).

I’d like to see someone release an Epub3 demo based on this. Any takers? Please let me know how it goes.

P.S. If this isn’t as innovative as I thought, please let me know. 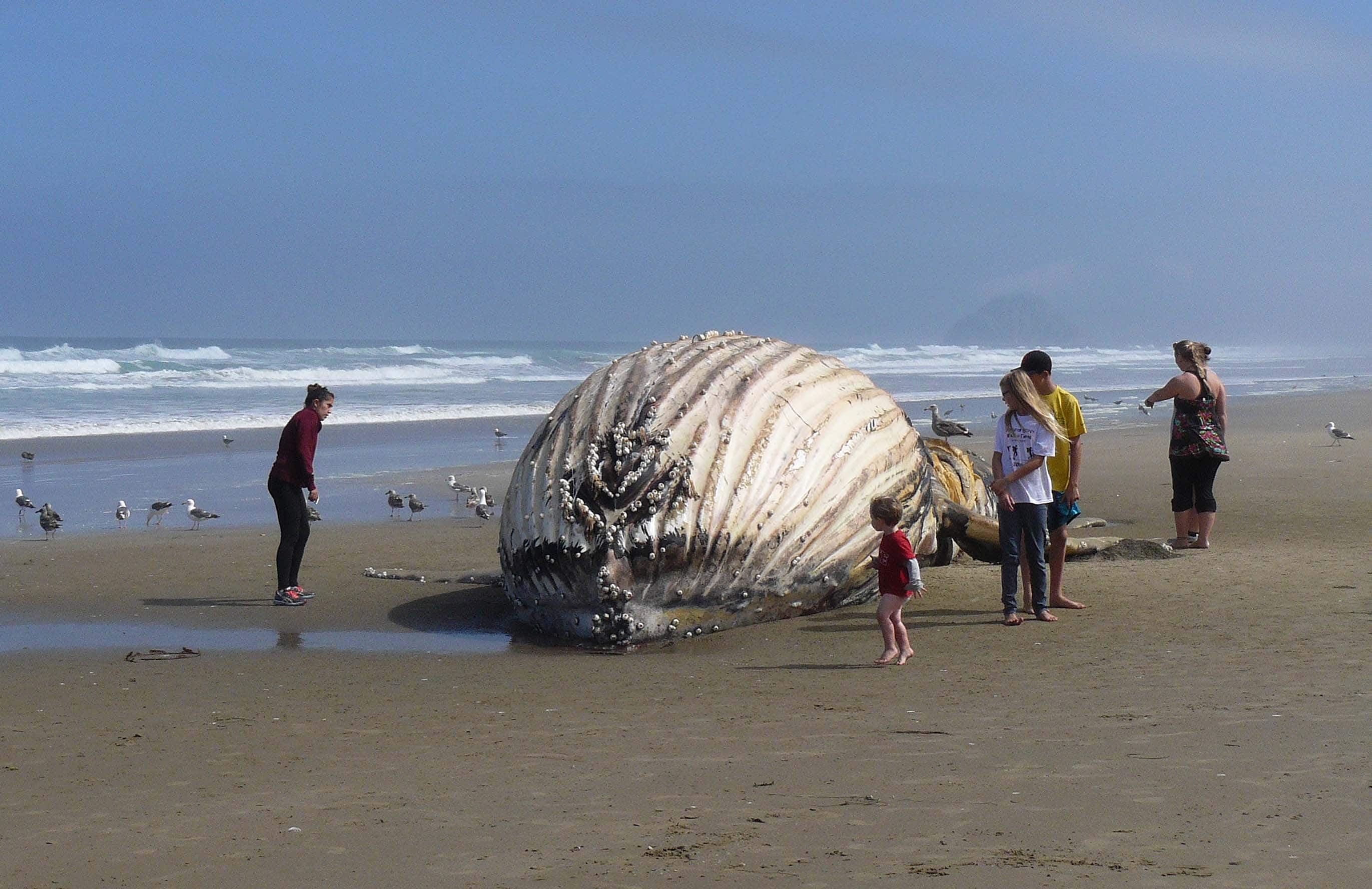 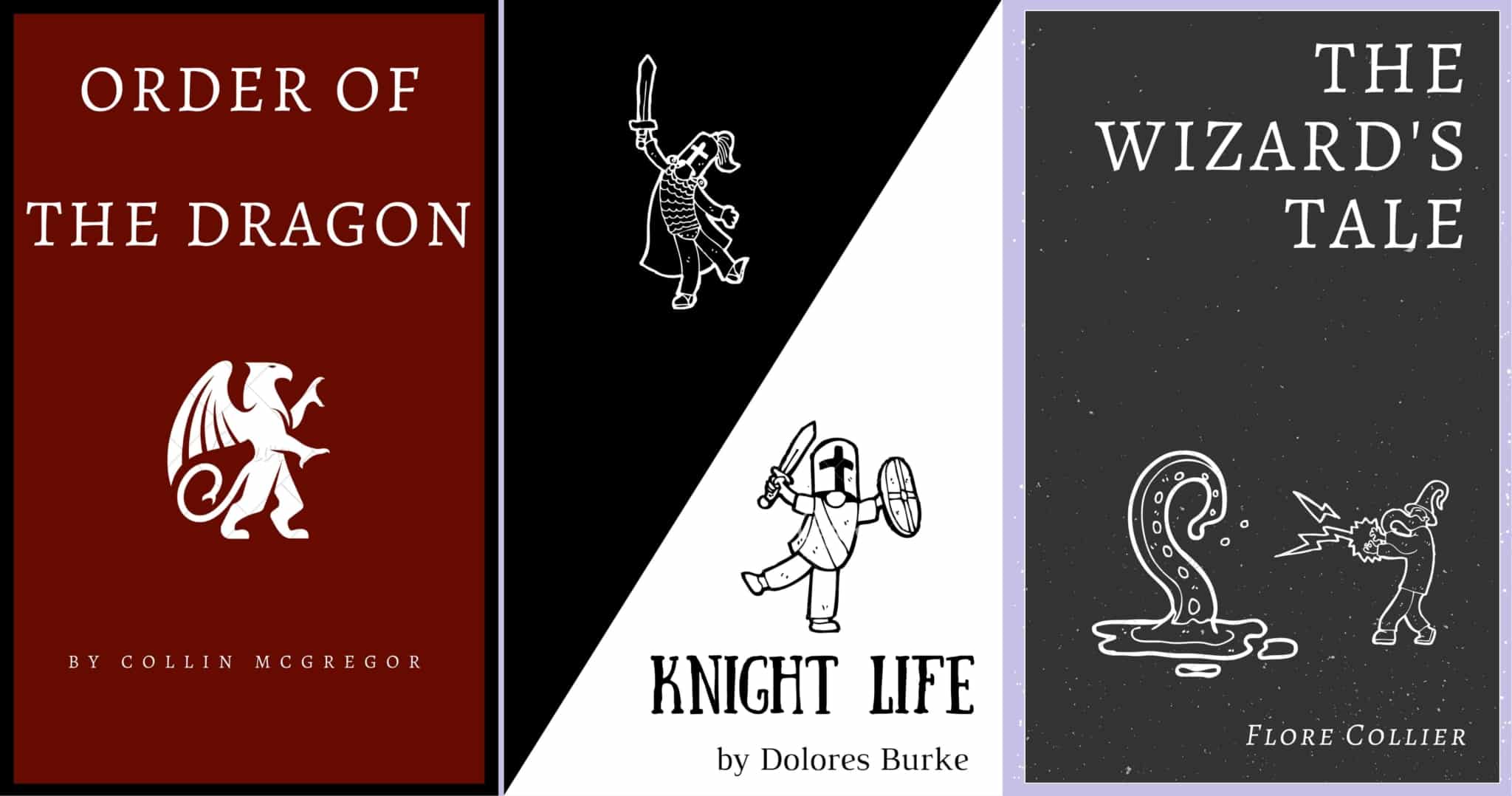 This is pretty cool, if they could do something of this standard with epub3 it would be a great selling point for the format and show it’s superiority over the older kindle format. The only draw back I can see with it would be the labour costs in creating each comic, compared to the more common scanning of the pages.

Epub3 would indeed be a good vehicle for this kind of graphical narrative, but so would KF8. In fact, if you look at the KF8 intro page at amazon, digital comics are one of the areas they highlight so it is not impossible we’ll see something similar soon.
The biggest issue is that this project relies on scalable vector graphics and current digital comics are bitmap images. Dynamic layout may be limited (initially) to rearranging/reflowing panels to adjust for screen size, orientation, and zoom factor but that is still an improvement.
A second win comes from the fact that such digital comics would be natively read in kindle/epub reader apps.
At a minimum, this will allow for the repackaging and distribution of web comics like the Foglios’s delightful Agatha H series.
Fun things are coming.

Actually, this project relies on PNG images for the frames.

Ah. So the limited pallette is an artistic choice?
Good to know.
Thanks.

Right now, comics workflow and composition is page-based; switching to dynamic layout would make it panel-based. That would impact the layout’s creativity but on the flip side, open the door to animated transitions and text-placement. A conversation could be built by sequentially adding the bubbles, for example. Trade-offs. A new narrative language would be needed.
The end result will likely be as different from curent floppies and trades as newspaper strips.

Also, given how closely manga and anime are developed and the prvalence of phone reading in asia the HTML5 toolkit is right up their alley.

[…] dimensions.This is interesting, but it’s not nearly as innovative as the demo I showed you last November. That was Pablo Defendini’s work, and it’s still impressive.via InMediaRes /**/ […]

[…] In the past I’ve shown you a couple digital comics ideas like Pablo Defendini’s HTML5 based concept or Marvel’s introduction of time as a story telling element. I’ve always been deeply […]