Google’s Project Ara offers the promise that you might be able to add just about any feature to your smartphone which a module maker can think up and if Unispectral’s camera tech lives up to the claims that could include the next best thing to a tricorder. 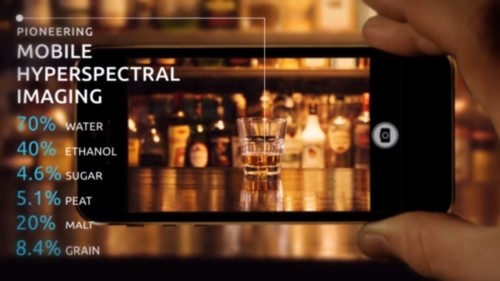 This Israeli startup is working on a new camera lens which the WSJ says will radically improve performance of smartphone cameras. According to its pitch sheet, Unispectral’s camera will feature superior low light performance, a higher frame rate, better noise handling, improved dynamic range, and most importantly, hyperspectral imaging capabilities.

Before you head over to Wikipedia to look up that last item, hyperspectral imaging is a branch of spectroscopy and of photography where you use a special camera sensor to collect more than just visual data (information from across the electromagnetic spectrum). It’s a real thing, and you can buy a hyperspectral camera – and now Unispectral wants to shoehorn the tech into a smartphone’s camera.

If it works then you’ll be able to point your smartphone at an object and determine its chemical composition, as shown in this video:

That’s a neat idea, but I honestly don’t think that the tech can be engineered into such a small size.

But even if it is, this would still come with a catch. Unispectral doesn’t believe that they can fit the analytical software into the smartphone; it would have to run remotely on a server. And that’s a problem:

Once the camera has acquired the image, the data is sent to a third party to process and analyze the material compounds and the amount of each component within the image. The third-party analyzer then sends the information back to the smartphone.

The new components of the lens and software came out of research at Tel Aviv University’s engineering faculty.

The imaging works in both live video and still photography.

Unispectral hasn’t started working with a third-party analyzer yet, but is in talks with major smartphone makers, automotive companies, and security organizations. It still needs to find a company or organization that can analyze the data from its cameras’ images. This back-end analyzer will need to have a database of hyperspectral signatures.

That’s a big if, but it’s not insurmountable.

Unispectral is hoping to adapt its tech to work with both smartphones and with wearables. If the idea pans out then we could be looking at new and cheaper medical and health sensors, as well as nifty new party tricks.

Too Little, Too Late: 13 Japanese Companies Form a Coalition to Bring eBooks into Bookstores