Three in Ten Americans Own eReaders 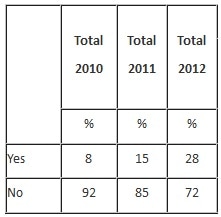 Harris Interactive just finished up another survey into ereader ownership, and lots of y’all own one. A full 28% of the 2,056 Americans polled last month reported that they read on an ereader. That’s up from 15% in July 2011 and 8% in 2010. Other key highlights include:

One interesting thing I noticed about the data is that the percentage of people who might get an ereader hasn’t changed significantly since 2010 (there’s also a typo in the chart).  This is constant even though ereader ownership has more than tripled in that time. This tells me that the question is likely irrelevant as a predictive tool. Either people don’t know what they want or something changed their mind (new features, better marketing, etc).

. That survey showed that the number of ereader owners nearly doubled between December and January (10% to 19%). Which one is right? I don’t know. But I do know that I’m going to take them both with a grain of salt.

Update: A friend pointed out on Twitter (one, two) that I had missed a key word in the press release. The Harris results include people who read on tablets as well as ereaders. That puts the 28% pretty close to the Pew survey result that says 29% of Americans own an ereader or tablet.

And I’m also looking forward to the next set of polling data. I’d like to know if Digitimes' prediction of a cooling ereader market is on the mark. You cannot answer that question from the data above (the quarter isn’t over with yet).

I could see this survey being skewed as peoples perceptions of what constitutes an ereader change. As an example everyone with a smartphone may now consider it a reading device where as two years they may not of.

Do you think these numbers could be explained at least partly by the fact that some of the new owners got their ereaders as gifts? I know my daughter didn’t know she wanted a Kindle until I got her one for Christmas. -)

Its probably a matter of differing methodologies and questions.
The PEW research survey is for *adult* ownership of readers and tablets:
"The share of adults in the United States who own tablet computers nearly doubled from 10% to 19% between mid-December and early January and the same surge in growth also applied to e-book readers, which also jumped from 10% to 19% over the same time period. "

The Harris poll is about *usage*. Shared gadgets and respondents counting tablets and smartphones as ereaders could get the numbers in sync.

What I find significant is that the numbers quoted in both hint that a majority of *heavy readers*, the folks that can most benefit from ebook readers already have/use them. Which suggests that near term sales will either come from casual readers or from device replacement sales. Barring new technology (color?) that brings in new readers in volume, a US sales slowdown would not be out of the question.
Me, I’m guessing 2012 is going to be a scramble for international sales.
Not good news for B&N, right?

It would be interesting to see what actually constitutes an ereader in the poll. I do not consider the Kindle Fire or the Ipad to be an ereader, but they can be used as such. And Smartphones are an entirely different set of rules when it comes to this.

[…] seeing a high ebook adoption rate among college students (higher than the rest of the population, according to Pew). But they’re not buying.  And unless something changes I don’t think they will buy. […]