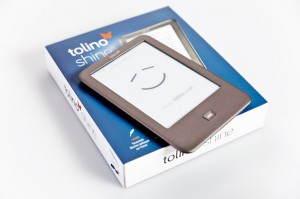 When the Tolino consortium was announced in March 2013 it was framed as a German response to Amazon and the Kindle, as 5 retailers and tech companies pooled their resources and put their support behind a single platform.

Today Tolino took on an international flavor. The Belgian retailer Standaard Boekhandel is joining the Tolino consortium, and it just launched a new ebookstore on its website.

Standaard Boekhandel now offers a catalog of over half a million titles, including 22,000 local titles and around 370,000 titles in English. The ebooks can be read in the Tolino apps for Android, iPad, and iPhone, as well as the Tolino Shine ebook reader.

The retailer is selling the Shine on its website and  plans to also stock it in store. Standaard Boekhandel has 145 stores across Flanders and carries books, newspapers, magazines, and gift packaging, as well as CDs and DVDs.

The 99 euro Tolino Shine launched last spring so it’s getting a little long in the tooth, and I really would have expected Standaard Boekhandel to instead carry the newer Tolino ereader, the Vision. The later model has the newer Carta E-ink screen, a thinner design, and generally looks prettier.

Today’s announcement is great news for Tolino; it’s the first sign of the consortium expanding beyond the original members, not all of which are in good health financially.  Tolino has had some trouble recruiting new members, with a deal to bring in independent German booksellers falling through last fall after MVB decided that the financial terms were too onerous. The indie booksellers would each have had to invest a million euros into Tolino (source), an amount which in the US would be enough to stock a good sized bookstore.

The Belgian ebook market, on the other hand, is of unknown size (I could not find statistics).

Tolino, aka Germany's Answer to the Kindle, Expands into Italy, Netherlands – The Digital Reader November 16, 2014 um 11:10 am

[…] July the Belgian retailer Standaard Boekhandel launched an ebookstore on the Tolino platform, followed last month by the Dutch bookstore coop Libri, and in November the […]

[…] this year Tolino expanded internationally when the Belgian retailer Standaard Boekhandel joined in July, followed in September by the Dutch bookstore coop Libris, and in November by the Italian […]