Toshiba Bookplace DB50 to Ship in February – Is This the First Blio eReader? 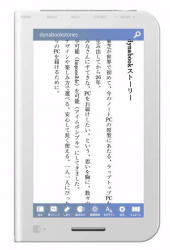 Toshiba has just unveiled their new ereader for the Japanese market, and it won’t be reading Epub.

The Bookplace DB50 is going to be a heavily modified 7″ tablet. It’ll have the same hi-res screen found on the NC and KF, along with Wifi, Bluetooth, and 8GB Flash storage. It looks to be running some disguised form of Linux or Android on a 1GHz Freescale CPU. The press release doesn’t give any hints about the OS, and that suggests that it’s not accessible. Pity.

Battery life is estimated at around 7 hours, and it ships on 10 February with  retail around $285.

The interesting detail today is that the DB50 is going to be tied to Toshiba’s ebookstore, Bookplace. That mkes the DB50 the first Blio ereader. Yes, Bookplace is Toshiba’s own rebranded Blio ebookstore (with round 50k titles).  The Japanese version obviously has different content than you can find in the US, but the format is the same. This thing reads Blio ebooks. 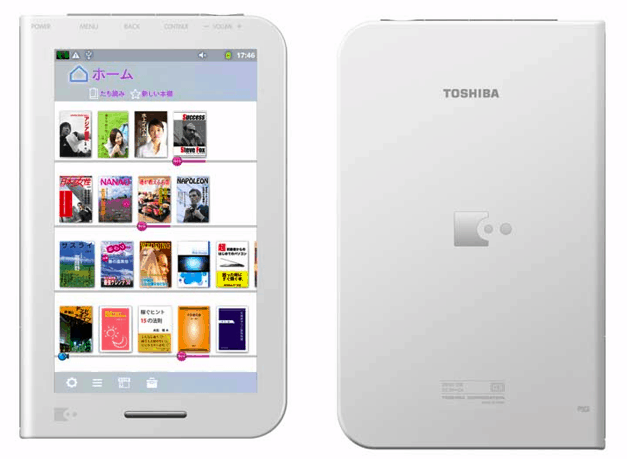 Hmm. I had been hoping that this format will simply die out. It’s not Epub and it’s not Kindle, so that makes it the red-headed stepchild of the ebook world. And yet it keeps sticking around. Between Axis360, the Blio compatible library ebook platform, and now the DB50, this format has lasted much longer than I expected.

I wonder if the DB50 will work with Axis360? I’m going to have to get one and find out.

Why Everyone is Wrong: eBooks Can* be More Expensive

It’s not epub.
It’s not Kindle.
That may very well end up being its saving grace if epub3 gets forked into irrelevance.
(Current odds? 6:1 against, up from 100:1) 😉

[…] Toshiba announced the DB50 ereader back in February of 2012 I never really expected to see it in the US market or to get my hands on it, but thanks to a friend […]