Intel has been promising for the past 5 months that we would see $99 Windows 8 tablet this year, and while the Encore Mini doesn’t quite prove the chipmaker right it does come close.

This $119 tablet is a very slightly upgraded version of the Excite Go Android tablet I reviewed a couple weeks back. It features the same unimpressive 7″ screen, Intel Bay Trail CPU, and limited battery life, only now with Windows 8.1 instead of Android.

The Encore Mini  runs Windows 8.1 on an Intel quad-core 1.33GHz Z3735G chip with 1GB RAM. Like the Excite Go, this tablet has a decent enough 7″ display with a screen resolution of 1024 x 600, and it has the same estimated battery life, 1GB RAM, a single edge-mounted speaker, and the same general lack of ports as the Excite Go, but Toshiba did improve the Encore mini’s specs in a couple places.

This tablet has 16GB internal storage, and it also has an additional 2MP camera on the back to complement the (IMO) unusable VGA resolution camera on the front. You’ll also find Wifi, Bluetooth, and an accelerometer under the hood. 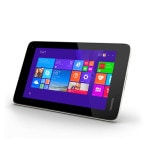 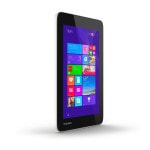 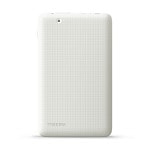 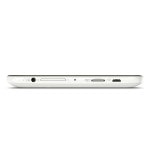 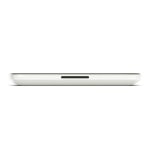 All in all this is a very light Windows 8 tablet which could probably have benefited from a bump in RAM.

It’s not the first Windows 8 tablet to break $150, but it is likely going to be the first to crack $99. Toshiba lists the Encore Mino for $119, but I am expecting Best Buy to put it on sale for $99 in the near future.

So tell me, would you get one? I’m notplanning to do so, but then again I am not a fan of Windows 8; I’d much rather get an Android tablet in this price range.

But even if I set my preferences aside, this tablet still doesn’t meet my standards for battery life – not unless it can improve on the estimated 4 hours of battery life of its Android counterpart.

The Digital Reader Will be Liveblogging the Amazon Event on Thursday

The ram being less than 2gb and the vertical 600 pixel depth kills it for me.

If it has an SD card slot it would make a great ebook reader, what with onboard Calibre.
If not… well, somebody will do better soon enough.

It says it supports an sdxc card up to 128 GB. Of course, that might be more than you’d want to spend for a card for this particular tablet. 😀

Well, I’ve seen 128GB thumb drives at $39.
Getting a card at close to that price should be doable.
I’ll keep an eye out for the next three months… 🙂

It’s cute, but Windows already feels a little small on the Dell Venue 8 Pro. For reading, the built-in reader is pretty decent for PDFs, the Nook software is actually quite good, but the Kindle app could use some work. I’m still eager to find out what the Microsoft "Consumer Reader" application will be like.

I really like Windows 8, but it is obviously easier to find more polished touchscreen applications on Android. Android also has a much better game selection, and Chromecast provides a pretty solid benefit. However, Windows 8 is extremely responsive, almost every service supports PCs, and I like the consistency offered (multi-window, search, app settings, etc.).

"I’m still eager to find out what the Microsoft “Consumer Reader” application will be like."

It’s been 6 months since it was first mentioned and that still hasn’t shown up. I’m wondering what happened to it.

I also wonder what happened to the Office Reader which leaked last September. I can’t recall this ever being announced, can you?
http://www.theverge.com/2013/9/27/4776200/microsoft-office-reader-windows-8-office-lens-windows-phone

I wonder just how much of that 16gb memory is usable, and if you can run apps from a micro SD card. Given the usual bloat, Windows 8 won’t fit in 16 GB by default, so they have to be trimming a fair amount from it.

Windows apps run from any drive so, yes, apps will run off the SD card.

Indeed. I recall complaints and even a lawsuit over the 32GB Surface only having 16GB of actual storage:
http://www.cnet.com/news/microsoft-hit-with-lawsuit-over-surfaces-storage-space/

I wonder what was left out of Windows 8 on the Encore Mini?

They do it by using the WIMboot version of windows

[…]  just in time to edge out the Toshiba Encore mini as the first of the $99 Windows tablets in the US market, the HP Stream 7 will feature an Intel […]

[…] have a Toshiba tablet which has the same CPU. That $109 tablet is more powerful than you would expect from the price tag, and I expect that Trekstor tablet will have a similar […]