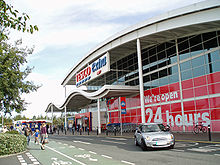 There’s been an unanswered question in the UK retail market these past few months. Who was going to sign up as B&N’s partner now that Waterstones had signed with Amazon?

Today Tesco answered that question not by signing up to be Barnes & Noble’s partner, like I expected. No, clearly Tesco isn’t one to think small because today they bought Mobcast. Tesco is picking them up for £4.5 million.

Tesco, who will always be remembered as the company who sold a stripper pole for 6-year-olds, had no real presence in the ebook market even though they had an ebookstore and sold several different ereaders, including the Kindle.

Mobcast was one of the lesser options for ebookstores, and according to the press release it carries a mere 130 thousand titles. In spite of that fact Mobcast has had some success in their niche, having provided ebookstores for telecoms like Nokia (in several countries), T-Mobile, and Orange. They also ran the WHSmith ebookstore – right up until that British bookseller became Kobo’s local partner in the UK.

And now Mobcast belongs to Tesco. This is just the latest move by the retail giant, which has been gobbling up content distributors for the past year. They’ve acquired Blinkbox to offer streaming video, We7 to offer streaming music and Mobcast to sell ebooks. I wonder if Tesco is looking at Amazon’s content empire in the UK and wishing they could match it? Tesco isn’t there yet but they are catching up fast.

Mobcast has also been running their own ebookstore ever since they lost WHSmith as a partner. Uncuva, a site which has twice won the title for "most likely to be named after a disease", has reading apps for Android and iOS. There’s no hint of plans for an ereader, but in this day and age that’s less of downside than some might expect.

This article is amazing for two reasons. First that Tesco have acquired mobcast.

Secondly that it states Tesco has no ebook store of its own.

So what exactly is at http://www.tescoebooks.com?

Where did I say they don’t have an ebookstore? I wrote that they have no real presence in the market, and that’s not the same thing.

Go ahead and point at that site of you like but what effect did it have on the ebook market? What was its UK market share? I’m guessing the answer to both questions in negligble, otherwise Tesco wouldn’t have seen the need to buy Mobcast.

And given that Mobcast is also a developer in addition to a distributor and services provider, I would describe Tesco as having a negligible ebook presence before buying the company.

[…] Blinkbox Books is built on top of Mobcast, the white label ebookstore provider that Tesco bought in Fall 2012 for £4.5 […]

Tesco to Close/Sell Blinkbox – This May Include the eBookstore – The Digital Reader October 1, 2014 um 9:11 am

[…] importantly for this blogger – ebooks. The retailer acquired the ebook distributor Mobcast in 2012, and used Mobcast to launch Blinkbox Books earlier this […]