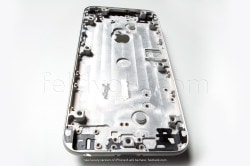 The Apple leaks continued yesterday with a new video posted by Feld & Volk.

This firm specializes in high-end aftermarket mods to the iPhone, and they used their relationships with Apple’s Chinese suppliers to get their hands on an iPhone 6 shell.

As you can see in the video below (and the image at right), the shell has most of the cut outs and screw holes you would expect in a smartphone. There’s no cut out for the camera and flash, though, suggesting that this is an early pre-production sample. The shell has curved edges and corners, and it looks a lot like the leaked dummy units we have been seeing over the past couple months.

It’s about the right size to fit the 4.7″ screen which everyone is expecting to see on the new iPhone 6. It also looks virtually identical to the shell which MacRumors received from an unnamed source.

The iPhone 6 is expected to launch in September or October.  The many leaks suggest there will be a model with a 4.7″ screen, and some bloggers are expecting to see a larger iPhone with a 5.5″ screen.

HP won’t be Shipping Any TouchPads until Friday