Visiting with E-ink (Sony’s E-ink Plans, Hands On with the Plastic Logic 100, and more) 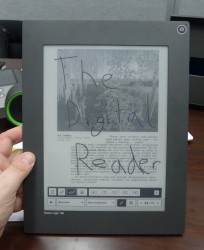 One of the more enjoyable aspects of this trip was the meeting I had today with  Sri Peruvemba of E-ink. We talked about many things,and I was glad that this was the one appointment that I remembered.

I’m usually pretty bad at remembering appointments at CES. It’s so crazy that I can’t help but get distracted and lose track of time. After last year I even swore that I wouldn’t make any appointments any more. But this time I’m glad I broke that vow.

One of the first things I asked Sri was if he knew anyone with Sony’s screen development division. He did, and in fact Sri had met with his colleague this week. They Sony guy showed off some neat new use of E-ink screens.

You might recall that back in May Sony showed off a few flexible E-ink demos. It is something they were working on for a few years now, and it sounds like they have a product in mind. But I don’t know what it is. Sri couldn’t tell me, which was understandable. Sony is keeping it a secret. In fact, it’s such a secret that the demos weren’t supposed to be in display back in May.

At this point all I really know is that Sony is doing something interesting with E-ink. Okay, we knew that back in May, but at least now I have confirmation. I cannot wait to find out what it is.

The next best part about the visit was when I lent Sri and his colleagues my Kyobo eReader. You would assume that a  manufacturer would want to look at a competitor’s products, but they are still waiting to receive them. They were surprised by the narrow viewing angle; they’d all seen the pre-production demos and this unit looked incredibly different. 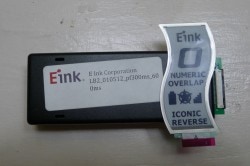 And then there’s the demo unit that they gave me. It’s a novelty device that shows off E-ink’s SIRF displays. It’s only a few inches long, and it’s powered by a couple AA batteries. You can see it disassembled at right. I took it apart to make sure it survived the trip home.

But the best part of the visit was when Sri pulled out the PlasticLogic 100 that he had been lent. This ereader launched on the Russian market back in September, and it uses PL’s own screen tech as the basis for an academic ereader. Since it was a Russian product, I never expected to see it, much less touch it, so I consider myself to be incredibly lucky.

The few minutes I spent with it were a lot if fun. The unit was in Russian, of course, so I don’t know what it said. But I did note that it had a capacitive touchscreen and supported both typed notes and scribbled annotations. It wasn’t terribly fast but it was the thinnest and lightest large screen device I’ve ever handled. As an academic ereader, it has potential.

I wish I could have brought it home and played with it some more, but no. I even offered to trade my Kyobo eReader for it, but they demurred.

Very nice stuff indeed Nate, thanks a lot! I’d really like to get a Platic Logic 100 into my hands too …

(By the way: I think you should put your photo with the Hanvon Wisereader (=jetbook colour) and the Mirasol one (you Kyobo?) up on the blog too.

What about COLOR eInk?!!? You needed to show it up against the Mirasol!!

Were there any other news or product concerning 10" or 13" e ink displays? Is it that hard to product just one good product with pdf reading which would be fast enough for the students?!

Thanks for the coverage anyways, I follow you since 2 years and it is always a joy to read this blog!

There was no news that could be shared with me, no.

[…] posted about my own visit with Sriram Peruvemba, the marketing director at E-ink, a few days back. Today I thought it would be interesting to post […]