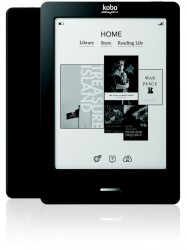 WHSmith just announced that they are closing their independent ebookstore in favor of a new partnership with Kobo.

WHSmith moved surprisingly fast on this deal. Their ebookstore is already powered by Kobo even though the press release still isn’t out. But that’s good for readers, because it means that you can choose from the over 2 million titles that Kobo carries in stock.

The new partnership covers the UK as well as Ireland, and it’s a good move for WHSmith. It’s also a great move for Kobo, who had been in the UK market for over 18 months now without getting any significant market share (my source indicated that they control under 5% of the UK book market).

Kobo also has reading apps for iOS, Android and Blackberry, and they will soon be releasing apps that have been rebranded for WHSmith. Kobo did this for Borders and they are in the process of releasing apps for their new French partner Fnac, so my guess is that WHSmith’s apps are in the work queue. That is great for WHSmith because their current iOS app doesn’t comply with Apple’s in-app purchase rules. It was pulled back in July and never replaced.

The Kobo Wifi is selling for the same price in the UK as the K4 (£89). That’s a clever move, but I still think the K4 is the better value. I have both devices, and I prefer the design of the K4 over that of the Kobo Wifi.

Opera Radically Reinvents the Web Browser With Coast for iPad

Existing ebooks bought from the old store have to be downloaded by 28th December 2011.

All the ebooks on my wishlist have a "Product Not Available" hyperlink but fortunately when I click on these links most are there after all.

If the kobo has a speak function, can you page backwards and forwards with this function switched on

[…] opinion // Mike Shatzkin wrote a post this morning on Kobo’s new partnerships (in the UK and in France) and how those deals were going to make Kobo one of the major ebookstore competitors. […]

[…] became Kobo’s latest retail partner just over a month ago, but one detail not mentioned at the time was if and when they would be […]

[…] WHSmith didn’t have this already? They have been Kobo’s UK partner since October 2011, and they’ve been selling ereaders since at least 2010. I would have thought they would have […]