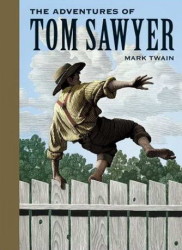 If you’ve been reading or watching the news in the past month, you can’t help but notice the furor over new editions of Tom Sawyer and Hckleberry Finn that will soon be released by Alan Gribben. These new editions will probably come to be known as the expurgated edition and they have one important change:

The word nigger has been contextually replaced with other words (slave, for example).

Note the word I used in the previous sentence. If you’re upset with having read it, or know someone who would be upset, then that is exactly why Dr. Gribben removed it from his new edition. I understand your reaction, and I’m not criticizing you for it. But I do want to point out that how you feel about the word pretty much precludes any chance of discussing the literary merit of the book.

Yesterday I came across a column Dr.Gribben wrote for his local paper. Here is how he explained his decision:

Overreacting critics have not bothered to look into the fact that neither "Tom Sawyer" nor "Huckleberry Finn" remains on the curriculum list of approved readings for our Montgomery County schools — simply because of a detestable racial epithet that Twain recalled uneducated people using in the 1840s during his Missouri boyhood.

In most of Alabama as well as in much of the South and in many other parts of the nation, Twain’s two best-known books are quietly being retired from public school reading lists because of the awkwardness of teaching even "Tom Sawyer" (which only uses the n-word nine times) in today’s integrated classrooms.

Is the NewSouth edition of Twain’s "Tom Sawyer" and "Huckleberry Finn" an example of "censorship," as some claim? In fact, just the opposite is the case. I have basically devised a way that public school districts can now reconsider these books for inclusion in their curriculums. My "Introduction" to this edition advises readers how to locate editions containing Twain’s original wording, and emphatically urges academic scholars to turn to those texts.

So here we have 2 choices. We can take the moral high road, and keep the word (that kids won’t be allowed to read in class). Or, remove the word so this seminal volume of American literature can actually be used in school. Which would you choose?

Personally, I’d keep the unexpurgated version in the classroom. My local school district still has these book on middle school reading lists. I don’t know if they’re being discussed in class, but I do know that they aren’t being denied to the students.

It’s all about context. It’s easier to ban a word these days than to teach children how to think for themselves. Sad, really.

Same as Roman Inquisition with its Sacred Congregation of the Index, which censored books.