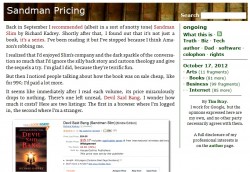 There’s an interesting story over on the Business Insider website which looks like it could grow into the next great internet witch hunt.

Earlier this week I posted an expose into Kobo’s inability to run a retail website, a story which I still don’t think got the attention it deserved. This morning one reader responded to that post with a link to the BI story which seemed to show that Amazon had the same issue.

It seems Tim Bray, a Googler living in Vancouver, is peeved at Amazon for showing 2 different prices on their website. If he’s logged in to his Amazon account he sees a higher price than if he is not logged in:

Back in September I recommended (albeit in a sort of snotty tone) Sandman Slim by Richard Kadrey. Shortly after that, I found out that it’s not just a book, it’s a series. I’ve been reading it but I’ve stopped because I think Amazon’s robbing me.

Tim goes on to relate that one of the ebooks in the series is on sale for $0.99, an offer which he didn’t get (due to regional restrictions, possibly). He also notes that he sees 2 prices for the last ebook in the series, with the higher one only visible when he is logged in.

I don’t think Tim’s issue is the same one I encountered at Kobo, and I am not alone in this. A number of people have commented on Tim’s original blog post and reached the exact same explanation I am about to provide.

Tim posted a couple screen shots which showed the 2 prices. I want you to take a moment and read them. If you know something about the global ebook market the cause of this price disparity is pretty obvious:

Do you see where the more expensive ebook mentions international delivery and says that the price was set by the publisher?

While I’m sure there could be other reasons for the price difference (and probably are), this pricing situation doesn’t seem to be the result of evil Amazon so much as it is the result of a stupid publisher.

Now, I do agree that Tim should not have been shown the lower price, but it seems that when he’s not logged in Amazon isn’t tracking him. This differs from Kobo, where I know for a fact that they accurately identified my IP address when I was not logged in.

The thing is, Amazon shows you the price based on what country you tell them you are in. If you want to see what an ebook costs in Canada, change your country and find out. You’ll need to provide an address, but that is easy to find.

All in all, this is a non-story.

you don’t even need to provide an address. On the Kindle Store pages that have the side bar on the left, there’s a note the top that says "Your Country or Region" followed by where Amazon think you are based on your account info. If you log out, the region changes to a drop-down list. Just pick the one you want to see prices for.

Thanks. I obviously did things the hard way.

Amazon shows different prices to different people anyway. If you have something in your cart it waves the price up and down to entice you to buy it. Now maybe that applies differently to different products – I suspect more to DVD than books – but Amazon does have people watching for and responding to trends in what people are almost buying.

I’ve only seen the prices change a couple times on the items in my cart. In both instances Amazon clearly indicated that the change had happened.