Smart watches are a hot topic right now, with Apple, Samsung, LG, and Google  all rumored to be working on one and with Casio, Sony, and Pebble currently selling a smart wrist decoration of one kind or another.

But the commercial designs don’t meet the needs of everyone. so I am pleased to share a couple DIY options for those who want to build a smart watch from scratch. 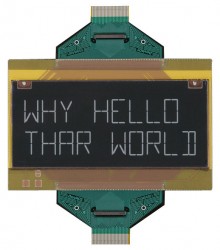 First up is a minimally functional and cheap screen unit from Sparkfun. This  $25 display, when combined with a $15 breakout board and a CPU board, will offer you the ability to show 2 shows of 10 characters.

That’s not much to work with, but it would be adequate for a push notification. And as you can see from this demo video shot in 2011, the display is about 3″ across so it should be quite readable. 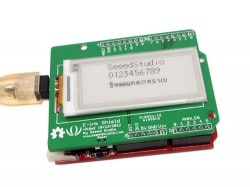 That screen can’t do much, but luckily this next one can. About a month ago SEEED released a screen unit which is designed to plug into an Arduino board.

They call it a display shield, and it gets the name because it takes up all the ports on the Arduino board. It costs $50 and is built around a 2.1″ E-ink screen with a resolution of 172 by 72.

You’ll also need an Arduino board ($25 to $100) and I’m not sure that you’ll be able to attach a Bluetooth daughter board at the same time as the E-ink shield.

In fact both of these screen units are going to require a lot of work before they’re ready, but if you are planning to go the DIY route I’m sure you knew that. 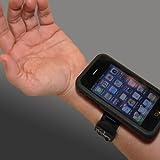 Me, I’d much rather go for something much simpler. Take this iPhone wrist band, for example. I would get it and use it to carry around an iPod Touch.

Now that is a smart watch. It’s also expensive ($35 plus $150 for the iPod Touch), but on the other hand it is much more capable than any other smart watch on the market or off.

I mean, how many smart watches can play Angry Birds? And just think, this watch won’t have to be hacked to answer the classic question "can it play Doom?"

I already have a Motorola Mobility (now Google) MotoActiv watch sitting (literally) right in front of me on my desk, it runs Android 2.3 with a MotoBlur launcher, and can be rooted to run stock Gingerbread with a zeam launcher. It has bluetooth, wifi, inertial sensors and GPS, sunlight readable display, will forward notifications from Droid phones. It’s focused on fitness and pretty nice.

So much for Apple inven^H^H^H Inno^H^H ^N Introducing smart watches.

It could manage a better battery life, but it is a pretty decent performance.

I do use it during fitness heavy days, but I tend to default back to my casio dumb watch day in day out due to the need for charging.

It looks like it would work with the Sparkfun ZigBee shield or the new Arduino Wireless shield without the SD card. Those only use the D0 and D1 pins for data, which aren’t used by this shield. BYW, the cheapest Arduino boards are about $25.
I do like your iPod/iPhone wristband, though; I wonder if I can find one for my Blackberry…

Go to the AliExpress site and search for a "Smart Watch".

See?
867 results, at least couple of hundred of them are small computers and/or mobile phones with color screen wearable on wrist.

Why is everybody (not you, Nate, obviously) talking about smart watches as if Apple, Samsung or whoever is *just* about to invent them?

And 83 listings are for smart watches running Android.

I know how you feel.

I mean, this blog gets a pass because this is a niche blog and smart watches are far outside the niche, but the major tech blogs don’t have that excuse. The Motorola, Sony, and Casio watches on the market have all been covered by Cnet, Engadget, etc, so you’d think those blogs could at least glance through their own archives before posting. Even if they didn’t mention the older devices, being aware of them would change the tone of the posts.

It’s for the same reason blogs talk about the iPad or iPhone as such important devices. Neither invented their product category – tablet computers have been around for more than a decade (see: Bill Gates' announcement of Windows XP back in 2001), and "smartphones" running BBOS and Windows Mobile were popular among businesspeople long before the iPhone was even an idea. Likewise, "smart watches" have been around for a while.

The difference, and the reason why Apple/Samsung are getting press for this idea, is that they have the ability to make it a mass market product. Smartphones generally weren’t owned by a "normal" person until the iPhone. Tablets, the same with the iPad. They were able to take a niche product and expand it into a huge industry. That is why the potential for a iWatch or Galaxy S Wristband with TouchWiz is covered so heavily by the tech media.

And, most bloggers have some sort of agenda and push some companies over others.

I don’t think the current obsession with Apple iWatch has anything to do with Samsung. In fact, I doubt the Samsung, LG, or Google stories would have come out or gotten as much attention without the Apple rumors.

Apple is getting all the attention because (for better or for worse) the blogosphere has Apple on the brain. It’s not so much that we think Apple will release a device that will create the market (remember the AppleTV?) but that we are in the habit of obsessing about Apple.

And when Apple isn’t doing something worth talking about they invent something to talk about.