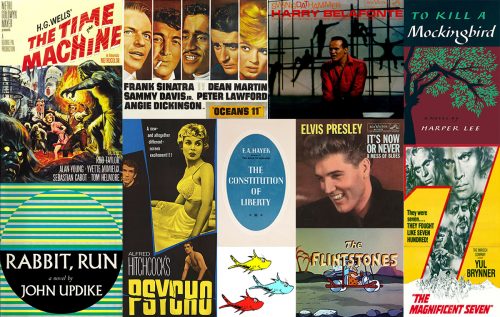 The public domain is the term given to a body of copyright free works that major corporations both pillage for source material and spend millions in bribes to Congress to keep their creations from entering.

It has become something of an annual tradition for Duke University’s Center for the Study of the Public Domain to note the works that would have passed into the PD had Congress defied the will of the mouse in 1976; in 2018 that includes works of Dr Seuss, Harper Lee, and Elvis, as well as the movies Spartacus, Psycho, and The Time Machine.

The books above are but a fraction of what would be entering the public domain on January 1. Imagine them being freely available to students and teachers around the world. Readers interested in iconic stories of courage in the face of racial injustice, or middle class America in the late 1950s, or just great literature, would have something to celebrate. In the current political climate, Shirer’s work, and also those of Hayek, Bell, and Schlesinger, might provide food for thought. And Dr. Seuss’s beloved books would be legally available for free online for children (of all ages).

You would be free to use these books in your own stories, adapt them for theater, animate them, or make them into a film. You could translate them into other languages, or create accessible Braille or audio versions. You could read them online or buy cheaper print editions, because others were free to republish them. Empirical studies have shown that public domain books are less expensive, available in more editions and formats, and more likely to be in print—see here, here, and here. Take, for example, The Conscience of a Conservative by Barry Goldwater—like the works listed above, it was published in 1960; but unlike those works, it’s in the public domain because the copyright was not renewed. You can legally download it for free, and the purchase price for an eBook is $0.99, instead of $10 or $20.

Imagine a digital Library of Alexandria containing all of the world’s books from 1960 and earlier, where, thanks to technology, you can search, link, annotate, copy and paste. (Google Books has brought us closer to this reality, but for copyrighted books where there is no separate agreement with the copyright holder, it only shows three short snippets, not the whole book.) Instead of seeing these literary works enter the public domain in 2017, we will have to wait until 2056.

What 1960 music could you have used without fear of a lawsuit? If you wanted to find guitar tabs or sheet music and freely use some of the great music from this year, January 1, 2017 would have been a rocking day for you under earlier copyright laws. Elvis Presley’s hit song It’s Now or Never (Wally Gold, Aaron Schroeder) would be available. So would Only the lonely (know the way I feel) (Roy Orbison, Joe Melson), Save the Last Dance for Me (Mort Shuman, Jerome Pomus), and Itsy Bitsy Teenie Weenie Yellow Polka Dot Bikini (Paul J. Vance, Lee Pockriss). Your school would be free to stage public performances of the songs from the musical Camelot (Alan Jay Lerner, Frederick Loewe). Or you could set a video to Harry Belafonte’s Grizzly Bear (Harry Belafonte, Robert DeCormier, Milt Okun) from Swing Dat Hammer. Today, these musical works remain copyrighted until 2056

Public Domain Review also has a list of creators whose work is entering the public domain in much of the world – just not in the USA.

[…] Would Have Entered the Public Domain in […]