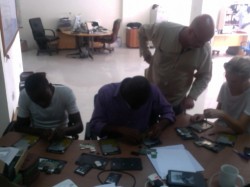 Worldreader launched in 2010 with the goal of using ereaders to improve the literacy of residents of isolated African villages, and they choose the Amazon Kindle due to the connectivity, ease of use, and generally positive support from Amazon.

But one detail that Worldreader hadn’t anticipated was how fragile ereaders are. Like many of us, Worldreader had to learn the hard way that E-ink screens aren’t particularly robust and are certainly not up to the task of being a kid’s first electronic gadget.

As Worldreader mentioned in their report earlier this year, they experienced a 40% breakage rate.

What’s more, like a lot of consumer electronics the Kindle isn’t designed to be repaired. To put it simply, it’s cheaper to build it to be thrown away when damaged. Given that most consumers are incredibly price conscious, naturally Amazon and Foxconn give their customers what they want.

This puts Worldreader (and any one else that exists at the end of a long supply line) at a disadvantage, but it’s not an insurmountable obstacle.  With a little ingenuity, Worldreader has created the service that Amazon can’t offer. 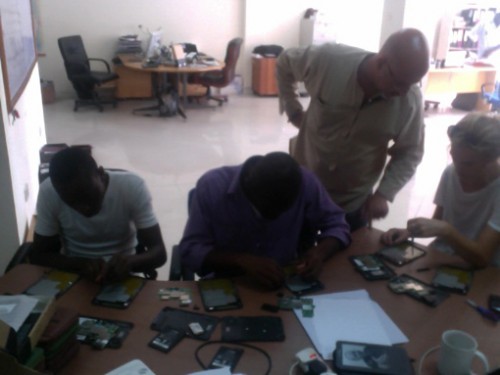 They’re now training technicians in Africa to disassemble and repair broken Kindles. For the most part (over 90% of accidents involve the screen) that means removing and replacing the screen. Considering that the screen assembly is solidly glued into a case, this is no small task. But it is still doable.

Worldreader is also working to reduce breakage by teaching the kids how to be more careful with the Kindle and by choosing better cases, like the one on the right. The cloth cases on the left are an example of ones which couldn’t protect the Kindle adequately, and they have since been replaced. 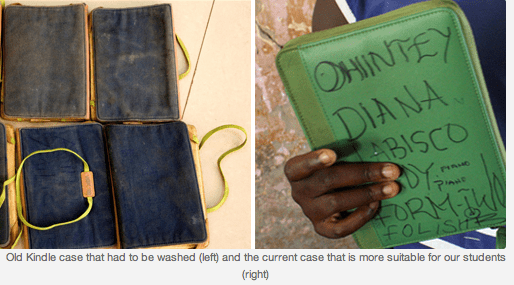 Worldreader now has the breakage rate down under 10%, with some projects seeing no broken Kindles at all. That’s a remarkable change, but it’s equally important to note that the original 40% rate was not actually all that high, even though it did sound bad.

Some of the OLPC projects reported damaging an even higher percentage of XO laptops, including one school which reported over half of their laptops being broken at one point or another during an 8 month period. There’s another report which listed a full quarter of the XO laptops in Uruguay being out of commission due to breakage, ongoing repair, or because the device simply won’t work. And there are other mentions in the OLPC community literature which reference 27% to 33% of XO laptops being out of commission at any one time.

Of course, the important difference between the XO laptop and the Kindle (besides one costing over twice as much as the other) is that the XO laptop was designed from the very beginning to be repairable by students. You can see that in the following video.

[…] – via The Digital Reader) This entry was posted in eReader and tagged Business, Kindle by Nicolas. Bookmark the […]