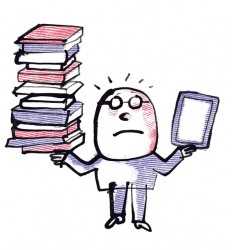 The new Amazon Kindle and Kindle Fire are expected to be launched a little under 2 weeks from now, and the blogosphere is abuzz with speculation, rumination, and navel gazing. I’m expecting to see a lot of editorials on ereaders in the next couple weeks, including a bunch that will best be described as nonsensical. And thanks to the Wall Street Journal, I didn’t have to wait long.

There’s a new post up on the WSJ website yesterday by one Joshua Fruhlinger. He’s breaking up with his Kindle because of one cross-country flight where he couldn’t use it because he forgot to charge it.

(Yeah, a tech columnist for a leading business newspaper isn’t competent enough to remember to charge his ereader. That made me double check to make sure I wasn’t reading The Onion.)

First, I have to wonder if he’s being completely truthful. He describes himself as having "two smartphones, a tablet, a laptop and a camera", and that he’s "been well trained to charge them regularly". Do you really think someone with that many gadgets would blame the device for his inaction? I doubt it.

And given that he owns that many gadgets, would you really believe he doesn’t read on any of them besides the Kindle? I call BS.

But ereaders, I found, are more challenging to maintain. I never could get myself to think of a book—even a high-tech one—as something that required power. I’m as much to blame for this as my ereader, but I was tired of repeatedly being left in the lurch.

But the Kindle is not a book. It’s an ereader -it is not a book because it holds books. Forgetting to charge it is like forgetting to grab your bag while you walk out the door; it’s not the fault of the bag.

There’s nothing more relaxing than reading in a hot bath—something my ereader and I could never enjoy together. (Holding an electronic device a few inches above water is not a good idea.) Sure, there are waterproof ereaders cases available—and you can always zip one into a baggie—but that’s like covering your couch in plastic.

I’ve never understood why someone would hold a paper book over a bath, much less an ereader.  But if you do like to read in the bath there are several waterproof cases for the Kindle. (Surely a WSJ reporter could afford to buy one?) I like the one from M-Edge, myself.

The rest of the article is as disappointing as the quoted snippets above. The last third is nothing more than a sales pitch for 3 current models from Amazon, Sony, and B&N (no Kobo), and right before that are several shallowly explained points used to argue in favor of ereaders.

But in general, the WSJ article is about on par with the crap that I expect to see over the next couple weeks. Thank Whedon I can heckle the worst parts; otherwise I wouldn’t be able to stand reading it all.

I was thinking the same things you wrote. In addition, a tech writer still using a K1 for travel? I don’t believe it. Why wouldn’t he have a Kindle Touch or one of the other newer readers? He wouldn’t be carrying around a 5 year old ebook reader. BS.

That’s one of his other errors: sloppyness. He doesn’t actually say that he still uses the original Kindle, even though the article does read like that.

Really, does everybody who writes about ereaders have to share their bathing habits with me? I’m getting tired of hearing how much they like to read in the tub. TMI!

You don’t have to read this but I too like to read in the bath from time to time. I use to read paperbacks but now that I read solely on e readers, I just read magazines. So I understand his point but it’s not a deal breaker.

My kindle lasts so long between charges its hard to remember it needs charged but if I was going on a trip I’d remember. And you know what would happen if you dropped a kindle in the bath water? You’d need a new kindle. Its not going to electrocute you.
Next weeks headline 'WSJ Reporter gives up cars because he ran out of gas'

"First, I have to wonder if he’s being completely truthful. He describes himself as having “two smartphones, a tablet, a laptop and a camera”, and that he’s “been well trained to charge them regularly”. Do you really think someone with that many gadgets would blame the device for his inaction? I doubt it."

Actually I can buy it. If he’s been well-trained by his other devices to never be more than 5 or 6 hours from an electrical outlet the notion of a device that can go weeks or months between charges may well be over his mental horizon.

Wow, that’s really reaching. He had to suffer through a whole flight without access to his kindle? That is world shaking.

So why didn’t he turn his phone on airplane mode and load up his Kindle app, full of the exact same books? That could have held him over until he could get to an outlet.

narcissists will say anything for attention–probably hates his kindle cause the glass doesn’t reflect his image as brightly as his bathwater does.

Wait a minute. My grandmother covered her couch in plastic. Is this an anti-Polish remark? And what about dropping a print book in the bath? I’d say that’s just as damning. Why wouldn’t you wrap that one in plastic? Especially when fumbling to hold it open with one hand while you turn the page.