There was a story on The Bookseller late last week that is generating a lot of attention. It contains a couple eyebrow raising quotes from James Daunt, the managing director of Waterstones.

According to The Bookseller, James thinks that library ebooks are a threat to booksellers.  But I’m not sure that’s what he said, and the way the quotes are used by The Bookseller makes me doubt their reliability.

Mr. Daunt was at a Financial Times event last week where he was first interviewed, and after which he participated in a round table discussion on the future of bookselling.

I was all set to write a post about Waterstones being doomed because the M.D. didn’t understand his customers, but I cannot. The Bookseller only has short excerpts of Daunt’s statements, and that’s just not enough material to support calling him an idiot. So I spent a few minutes in Google and turned up a podcast which you can find

I’d recommend that you listen to the podcast. I have listened 3 times now and I have something of a problem. I cannot find the first quote anywhere (I’m going to look really stupid if I missed it).

The second and third quotes are found in the  8 minute podcast  (1:00, 2:50) but the first quote is not. I can only conclude that the quotes mentioned by the The Bookseller are at a minimum (1) taken out of order which leads me to think they might be (2) taken out of context.

The only thing I can accuse him of is looking down his nose at the ebooks his customers are reading, but that’s hardly worth noticing, much less criticizing Daunt.

I really would have liked to have written the post I had originally planned and joined in on the heckling. But as much as I would enjoy pointing out Daunt’s lack of understanding, I cannot reliably show that he made any questionable statements. 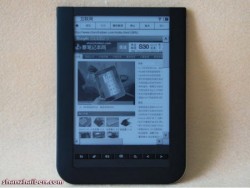 This is quite possibly the most detective work I’ve ever seen someone put into potentially calling someone an idiot.

LOL I didn’t want to let the work go to waste.

FWIW, after reading the teleread post I’m glad you did it.

I’m done with teleread, is what I’m saying.