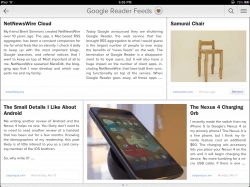 When Google announced the imminent death of Google Reader 2 days ago they sent all the many millions of users scrambling to find a replacement.

Zite, one of the leading entertainment-focused news aggregation apps, is looking to pick up some of those users. Yesterday they announced that they had a replacement for Google Reader up and running:

We at Zite were sad to hear about Google Reader’s impending demise.  Google Reader and Zite have always been complementary products: GR providing news from sources you’ve subscribed to manually and Zite giving you news algorithmically-targeted from the whole web.

Since Google Reader is dying, we created a replacement in Zite that doesn’t depend on Google’s infrastructure.  From start to finish, in six hours.

Zite has always worked with Google Reader (though it has never been dependent on it), and now the service is offering a specific Google Reader based section. 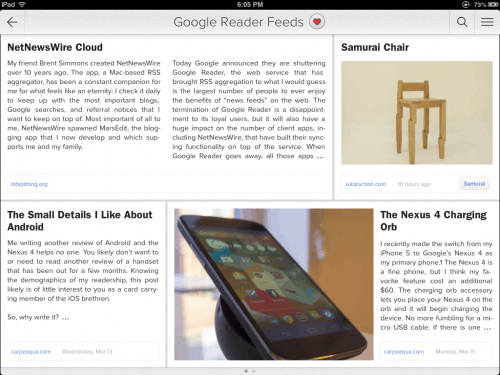 The new section is available now, and to use it you will of course need a Zite app for iOS, Android, Windows Phone 7, or the web browser. And this was a rush job, so there are some issues:

I personally wish they had offered this a long time ago; I had already curated the feeds I wanted to read and I didn’t need Zite to tell me what I liked. But I can understand why Zite didn’t offer this option a year ago.

Marco Arment, founder of Instapaper, explained why there was no ready replacement for Google Reader when the news broke 2 days ago:

Google Reader is a convenient way to sync between our RSS clients today, but back when it was launched in 2005 (before iPhones), it destroyed the market for desktop RSS clients. Client innovation completely stopped for a few years until iOS made it a market again — but every major iOS RSS client is still dependent on Google Reader for feed crawling and sync.

He’s not wrong, and we can see that in Zite’s announcement. Zite could have built a Google Reader replacement into their app last year but they didn’t. So long as Google Reader was around there was no need to focus on copying the best and most successful feed reader on the market. Instead Zite felt that their time was better spent on developing features and abilities that Google Reader didn’t have.

Marco goes on to write:

Now, we’ll be forced to fill the hole that Reader will leave behind, and there’s no immediately obvious alternative. We’re finally likely to see substantial innovation and competition in RSS desktop apps and sync platforms for the first time in almost a decade.

It may suck in the interim before great alternatives mature and become widely supported, but in the long run, trust me: this is excellent news.

IMO in the past 2 days we’ve seen more innovation in the feed reader market than we’ve seen in the past 2 years. Sure, in that time we have seen the launch of several prettified news reading apps, but they were all largely focused on offering a prettified reading experience – the one feature Google Reader lacked. Now all those apps are going to have the chance to grow into a replacement for Google Reader.

Things are going to get really interesting.

"Things are going to get really interesting."

You needed something to cover between release of new devices.

I tried Zite a while ago, didn’t like it. In iOS, I prefer Flipboard. The problem is that these are consumer applications, developed for entertainment.

Where’s the workhorse application for RSS, that does everything Google Reader does?

Still hoping that Google will have a change of its stone-cold heart and will keep GR going. I’ve had a look at the replacements, they’re all consumer-oriented. If worse comes to worst, there’s always BlogLines. From what I remember, it wasn’t bad. I stuck with it during the early years of GR, until Yahoo threatened to close it, and then didn’t.