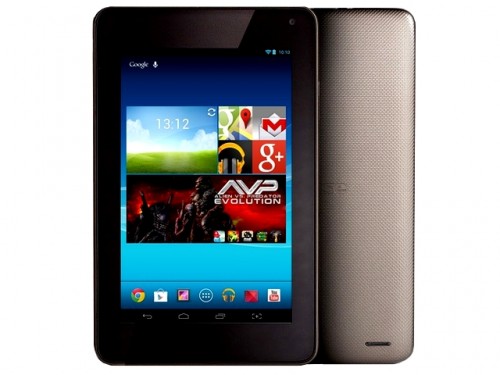 In the 7 months since the Sero 7 Pro was announced this tablet has been reviewed by everyone and their tech guru. At this point you might think that nothing new can be said but I beg to differ. The tablet market can change a lot in such a short time, so an opinion rendered in May or June 2013 won’t be based on the same details as the opinion I am writing in December 2013.

The general build quality and overall fell of this tablet is outstanding; I can readily say that the Sero 7 Pro is as well built as tablets priced $50 more. While most budget tablets have a simple plastic shell with (if you’re lucky) a thin layer of rubber, the Sero 7 Pro has a textured shell which makes it easier to grip. There are 2 speakers on the right end of the rear of the shell (as well as the NFC chip), and a 5MP camera on the left end.

The front of this tablet is the standard black glass, mounted in the rear shell. There is a 2MP camera on the upper left corner slightly above the 7″ screen. On the left edge of this tablet you’ll find the microSD card slot, HDMI port, USB port, and the headphone jack.

This is a nice tablet to hold and to use, but it is a little on the large size. It’s nearly as large is my 2012 Kindle Fire HD, and it weighs about the same as that older tablet. For the most part this won’t be a tablet which can be used in one hand without a case of some kind. I can hold it by the edges, yes, but it is at the upper limit of what I am comfortable with.

I will note, though, that the volume buttons are positioned on the edge in a way that they can be used as next and previous buttons. This will enable you to read one-handed so long as your app supports using the volume buttons for a second purpose.

In addition to having the build quality of a premium tablet, this tablet also has the bloatware found on a lot of name brand tablets.

The Sero 7 Pro is running Android 4.2 Jelly Bean which, from what I have seen, is unmodified from the stock version released by Google. In addition to all of Google’s bloatware (Google+, Talk, Play Music/Books/Movies/Newsstand), this tablet also has apps for Walmart, Vudu, and Sam’s Club. (A lot of the tablets which are exclusive to Walmart have those apps; it’s part of Walmart’s sub rosa online sales efforts.)

But there is an upside to the bloatware; Hisense also bothered to include a decent media player app and Kingsoft Office suite.

There’s no file manager, though, and the included Nook app is frankly terrible. I made the mistake of trying the app rather than sideloading ebooks and reading in Aldiko, and I noticed that the Nook app is slow to wake up, slow to load ebooks, offers limited formatting, and throws a hissy fit if I wake up or start the app without an internet connection. Would you believe it tries to redownload the book covers each time I wake the app?

In the month or so that I have owned this tablet it has lived up to the reputation which it’s gotten online. It’s a pleasure to use, but to be honest that is largely due to the polished hardware design and high resolution screen.

If I were to judge the actual performance in the absence of its physical design, I would have to say that I’m not sure I see how this tablet is significantly better than some of the sub-$99 Android tablets I have tried – even though few of those tablets had more than a dual-core CPU.

For example, the HP Mesquite tablet (my choice for the $99 market) is outpointed by the Sero 7 Pro on the benchmark test but (when I had my hands on it) was about as capable.

The Sero 7 Pro has a 7″ screen with a resolution of 1280 x 800, the same as on the Kindle Fire HD or the 2012 Nexus 7. The colors are sharp and strong, giving this screen a quality that equals the screen on tablets that cost considerably more. This tablet has a wide viewing angle, and I do mean wide. You can turn this tablet nearly 80 degrees in any direction before losing image or color quality. that is almost as wide a range as on more expensive tablets.

The back light, on the other hand, doesn’t have much range. It can get bright enough to double as a flashlight but when turned off the screen is not at all dim.

This tablet has 2 cameras, a 2MP camera on the front and a 5MP camera (with LED flash) on the rear of the tablet. They are complimented by a better than average camera app that has features like face recognition, auto-focus, and a handful of customizable settings and filters that come with Android 4.2.

Compared to the cameras on the sub-$99 Android tablets I have been reviewing over the past few months the cameras on the Sero 7 Pro are quite good. Of course, that’s not saying much; those cheaper tablets by and large had cameras that were so bad that the resulting images were closer to being a new type of impressionist art than photographs.

They’re still not up to the standards of a premium tablet, but they worked well outside. They even worked okay inside (if you have enough light), and you should be able to use the webcam for video chatting.

If you read the reviews from the major tech blogs (Engadget, LaptopMag, etc) you will get the impression that the Sero 7 Pro has great battery life, with most estimates placing it as more than 8 hours. Even the manufacturer claims that it has 7 hours of battery life.

I didn’t get results nearly that good, but then again I didn’t bias the results by reducing the backlight to 50% like Engadget did.

After testing this tablet several times I would say that you should be able to watch videos on this tablet for a good 5 hours before the battery dies. That is a decent result, but it’s not nearly as spectacular as what other reviews are claiming.

On a related note, the Sero 7 Pro (my unit, anyway) suffers from the common problem of not actually being asleep when the screen is off. This runs the battery down just as quickly as if you were using the tablet, but luckily you can fix the issue by installing an app.

I would suggest that you get one app in particular: DS Battery Saver. There are many free battery apps in Google Play, but this is the one that I know for sure will work to fix the battery life issue.

Due to Walmart selling this tablet for $149, dropping the price to $129, and then raising it again (during the holiday season), I can’t offer a straightforward opinion.

When the Sero 7 Pro was selling for $129 it was easily the best value in its price range. It has an attractive shell, 2 cameras, excellent performance, decent battery life, and is simply a delight to use. And if it sold at that price in December 2013 I would suggest that you get it (January is another matter). 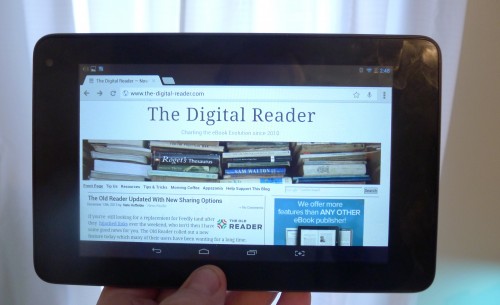 But when this tablet is selling for $149, things change. This is still a great tablet, but I can’t say with absolute certainty that it is a better choice than the $159 Kindle Fire HD or the other tablets in this price range. Sure, it has better specs in many ways (and better benchmark results, even) but it really comes down to what type of tablet you want to buy.

Do you want a general purpose Android tablet (with cameras and NFC) or a media tablet (playing games, watching videos, and reading ebooks)?

I can’t speak for anyone else, but I would get the $159 Kindle Fire HD over the $149 Sero 7 Pro because of all the free content I have from Amazon. I only use my Kindle Fire HD as a media tablet and it is, hands down, the better tablet for media consumption.

And one more thing. I am writing this post in early December 2013 and talking about a tablet released in May 2013.

I am bringing the dates to your attention because in the next 3 to 6 months any number of tablets will be launched that could present a better value than the $149 Hisense Sero 7 Pro. For example, a couple weeks ago HP has released a $149 tablet that is almost comparable in specs. More and better tablets will be coming in the near future.

And while I am mentioning the competition, you might also want to consider a sub-$99 tablet like the HP Mesquite. The hardware is not nearly as pretty but in terms of performance the cheaper tablet is not much less capable (unless you’re into serious gaming, which I am not).

It might interest you to know that the tablet is now going for $85 online.

Yep. And that’s why I recommend the Sero 7 Pro in my budget tablet post as the best option.