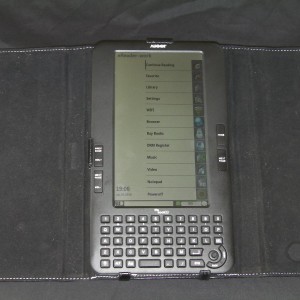 I stopped by my local Kmart store Monday night, and much to my surprise they had The Book in stock. I bought one, and I opened the box before before leaving the parking lot. I have to say I’m rather impressed. It’s not perfect, but in the sub $100 price range it’s fairly good.

Normally I’d skip this part, but I wanted to point out that there is a user manual with a CD. It has the calibre install files on it on it. I just find that rather amusing, that’s all. You also get the following in the box:

The Book also comes with 150 ebooks from Project Gutenberg. I would delete them if I were you. You can get much better copies elsewhere for free. 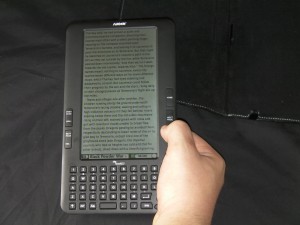 It’s a Kindle clone, obviously. I’ve covered the specs before (here), so I’ll just give a brief description. It has a 7″ LCD screen (not a touch screen) and there are 4 buttons to the left and 2 buttons to the right of the screen. Beneath the screen is a keyboard, joystick, and several extra buttons (menu, back, symbol). All the ports and card slots are on the bottom edge and the battery is not user accessible. On the bottom edge we have power jack, USB port (mini-B), headphones, SD card slot, and power button.

My first concern was that the long screen + keyboard would make the ereader feel big and awkward. Nope. It is bigger than the Kindle, but I think it has just the right proportions. It’s difficult to explain the aesthetics, but they work.

The screen wasn’t what I was expecting, though. It is completely usable for reading or browsing, but I don’t think a video buff would be happy. It’s backlit, and you can adjust the setting. I spent some time outside, and I’d say that this screen is definitely usable in full sun.

I like where the page turn buttons are placed. They are at just the right height so this is one handed ereader for either hand. The keyboard OTOH isn’t very usable. You might not want to use it to take extensive notes because all the punctuation is accessed with the alt key (rather like some smartphones). But if you’re used to typing at length on a smartphone, you might not mind. BTW, the punctuation is printed in a really tiny font. I have to hold The Book about 6″ away from my face before I can tell which button I want to push.

The way you select the punctuation is kind of funky. Take the exclamation point, for example. It’s printed above the letter q, but alt+q doesn’t work. Instead you have to do shift+1. I wish they’d stuck with one or the other.

It comes with a basic black pocketbook style case. Even though it has a cheap feel to it I’m still glad to have it. When closed it looks good, and when open it makes it easier to hold The Book. The case is a plus.

It has a browser, music & video players, and a Notepad app as well as the reading app. You can also buy ebooks from the device, and it supports Adobe DE DRM. I’m going to pass on the video and audio players; they’re adequate extras but they aren’t good enough for them to be the main reason you get this ereader.

BTW, while you can buy ebooks from the The Book, I wouldn’t. The ebookstore doesn’t have good prices, so you’re better off buying elsewhere.

I tried the browser, and the The Book found my Wifi network on first try. Load time for Google was good. Then it choked when I tried to get it to load GMail (that wasn’t fair, I know).

Curiously enough, opening the browser the second time didn’t cause the The Book to reconnect to my home network. I had to turn on the Wifi and connect manually. But it did remember my password.

Unfortunately, I have to say that this is not a usable browser. The Wifi range is shorter than any of my other gadgets. I couldn’t do a demo video because The Book couldn’t see the router 15 feet away in the next room.

And the browser is also very slow at loading pages. But the upside is you can download ebooks from Feedbooks and the like (if you’re close to the router).

This app is very basic. It’s strictly a note taking app and it doesn’t have any formatting options. Even so, I have the feeling that if I used the The Book for any length of time I could adapt my 4 finger typing style to the Notepad app. I think I could get used to it (if not for the punctuation issues).

This had a number of bugs and was short on features. It has folder support, which is good. But that’s all it has. It doesn’t have any sorting, search, or index options. It kept forgetting the SD card. Also, it insisted on using folder icons for all files. I had to guess which icon was the ebook.

I tried both Epub and PDF. The Book supports Adobe DRM so I assumed that these formats would have the best support. PDF was a major disappointment. There was no reflow option, nor could I auto crop the white space. All I could do was zoom in. I also couldn’t rotate the screen (some of my PDFs are wide, not tall).

There were 5 fonts offered for Epub, which is good because the default is ugly and it added extra spaces before punctuation. Aside from bookmarks, I didn’t see any annotation abilities or a dictionary. Boy is that weird. Why else have a keyboard if not to add notes?

You can set the margins and justification for Epub, and that’s a plus. It also has TTS, but it’s rather mechanical. It’s not as good as the Kindle’s, but I was expecting that.

Augen The Book has solid hardware, a nice case, and it meets my minimum requirements for reading ability. Even though I had problems with the Wifi, this is still a very good ereader if you can get it for $89. I would not get it at the $139 price; for only $10 more you can get the Nook Wifi.