EDIT: This post combines several posits about the Jetbook Mini. 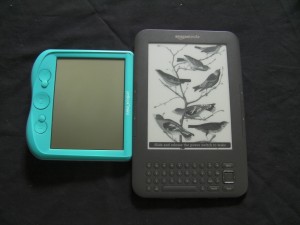 I got the Jetbook Mini just over a week ago, and I have to say it was a lot of fun.  I was ready to write the review after only a few days (it’s basic ereader), but I held it because Ectaco promised a firmware update (it came with a pre-release firmware). I’m not sure I should have waited; it’s still missing key features.

The video is at the end of the post.

Ectaco are a company that should be known to anyone who follows ereader news. They launched the Jetbook, their first ereader, in early 2008. The Jetbook Lite (same ereader but running on AA batteries) was released in 2009. And now the Jetbook Mini will be coming out in October 2010.

The Jetbook Mini is actually the first ereader designed just for Ectaco. The previous 2 models were originally developed for the Chinese markets by JCNIP. You can buy them in China under the brand name Dr.Yi (with a different firmware, of course).

The Mini is a very basic ereader. It lost almost all the buttons that were on its predecessor as well as the internal storage and MP3 player. It shares just one hardware detail with its predecessors: the screen. The 5″ LCD screen is a low power, grayscale entry into the epaper market that was originally developed by Toshiba. The Mini has an SD card slot on the upper edge, a USB port on the lower edge, and 5 buttons to one side of the screen. The buttons from top to bottom are: Menu, up, Enter, down, and Exit/Power.

The battery compartment is behind the buttons. It holds 4 AAA, and the Mini only needs 2 AAA to run. This will let you swap out a pair without losing your settings. I like that. I also like the way the batteries are placed so you can grip the thickest part of the ereader.

The Mini is pleasant and light, but it’s clearly been designed for hands smaller that mine.

The Mini shipped with Sudoku and a tetris clone. They’re not easy to play, unfortunately;  it’s really not obvious what each button did. But you won’t buy this for the games, so it doesn’t matter. 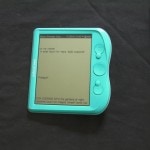 It was a lot like reading on my Jetbook, and that’s not a good thing. It took a long time for a book to load. Page turns were slow; I compared it to my K3 and the K3 was faster. Images and links were missing, as was most of the CSS formatting. 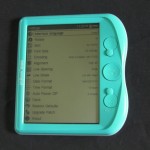 On the up side you do have a lot of formatting options to pick from. You can set the justification, line spacing, font size, text encoding, and paragraph break behavior. All 4 screen rotations are supported, so this ereader should please a lefty.

As I reach the end of the review, I have to ask myself this: Would I recommend an ereader that makes its users go through extra work (conversion) for a poorer experience (no images, TOC, or links)? The answer should be obvious.

I really think Ectaco should either improve FB2 support or replace it with Epub. I wouldn’t get the Mini until that happens. I also want them to improve the page turn speed.

Right now, the Mini is listed for $99. You can get the Aluratek Libre for that price. If you have limited funds I would recommend the Libre. 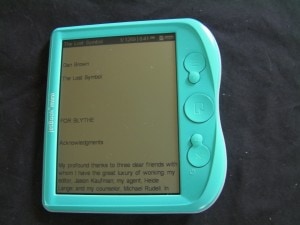 I had a poll yesterday about which ereader I should write about next. I had just gotten 2 ereaders, a Jetbook Mini and a Skytex Primer. I’ve decided to write about the Mini first, but not just because it had the most request.

It came with a copy of Dan Brown’s The Lost Symbol, and a copy of America Alone by Mark Steyn. Neither can be bought in a format that the Mini can read. (One thing you should know about the Mini is that the limited format support does not include any DRMed format: only FB2, txt, and html.)

And I didn’t get a Mini that belonged to someone at Ectaco. Mine came in a retail box. The included files weren’t someone’s personal library; they were samples that would have shipped with the Mini.

Update: Ectaco are reporting that the files were loaded by the last person who had the review unit before me. Given that these were the only 2 FB2 files on the Mini is plausible. It doesn’t make them look that much better, though. This is something you check when a device comes back in.

While I have the pictures handy, look at the formatting. It’s dreadful. I’ve converted a couple of ebooks from my library to FB2, and they are just as bad. But I’ll cover the conversion issue in another post. 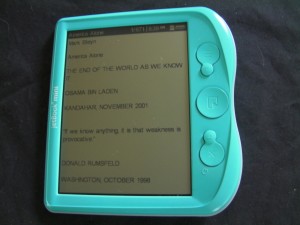 Ectaco is continuing their campaign of torturing me with driblets of information. This demo video was shot at the Moscow Book Fair this week. It’s in Russian, but you can still learn a lot about the Jetbook Mini.