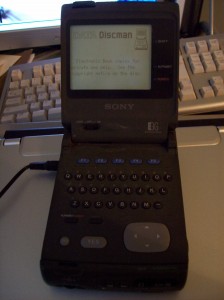 A new trade in offer showed up on the S0ny Style website yesterday. Send Sony your old ereader and they’ll give you a $75 credit towards a new one. I’m going to take them up on this offer.

I spent a day digging through my collection and I’ve decided to part with one of my old Sony Data Discman.  I bought this one off Ebay in August 2008, and with a manufacturing date of October 1991 it holds the title as my oldest fucntional ereader.

This is one of the earlier models. For the most part Sony numbered the models sequentially, so the DD-1 was released before the DD-20. But I also know this was an early model becuase it only supports the basic Data Discman ebook format. You see, Sony developed several different formats for the DDs; I know of at least 2, and there might have been as many as 4. The basic format only has text and images, and the more advanced format EBXA supports embedded audio. I’ve also found hints that there was a format with embedded video, but I haven’t seen it.

I’m parting with it, though. The screen barely works anymore, and the battery won’t hold a charge. Its only value now is as a display unit, and I have a couple other models that are in much better shape.