This is a post that you probably think isn’t worth reading. I bet you already read about the ereader that Aluratek announced. Well, that press release was incomplete. Aluratek have a tablet and 2 new ereaders (one was released a few weeks ago).

First, Aluratek are going to be a hardware partner for Marvell. They are adopting Marvell’s 10″ (1024×600) reference design as the Cinepad. It’s going to have the great specs that Marvell promised as well as a capacitive touchscreen.

I was going to get a picture of the pre-production model but when I stopped by all they had was the Marvell prototype. Needless to say it will look a  lot different. It should be out soon with a retail of $299. 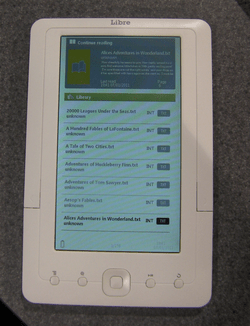 Aluratek also have a new based on a 7″ (480×800) LCD screen. I haven’t seen this ereader before but I recognize it as being designed by Gajah. It’s even using the exact same menu system as the others I have. It has support for Adobe DE DRM and it probably will also be a decent PMP. I want to double check that first, though. 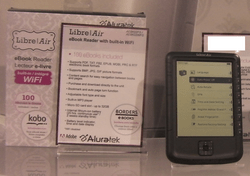 The other new ereader is the Libre Aire. It’s based on the same 5″ screen as the Libre Pro, and it has basically the same feature set . But it also comes with Wifi and swipe pad (which replaced the arrow keys). It should be available in March and cost less than the Libre Color.