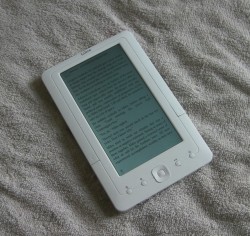 I’ve had this ereader on my desk since before BEA 2011, and I have to say that I’m rather pleased with it.

Aluratek launched the Libre Color in late 2010, and it is their second ereader. It’s a basic device with a so-so 7″ LCD screen (800×480), and it has 2GB Flash, a SD card slot, speakers, headphone jack, but no Wifi or touchscreen.

In terms of size and shape, it resembles a white brick. It’s a little heavier than your average ereader, but I’d bet it’s also sturdier (I don’t have the guts to do a drop test).

As you can see, the front is white. The back is a plain matte grey with 2 speakers.  There’s a page turn button on either side of the screen, and the D-pad and 4 buttons below the screen (menu, font, play , back). There’s 2GB Flash inside and a SD card slot, headphone jack, USB port, and power jack along the bottom edge and it does charge off USB. The 700EB ships with a case, power supply, and USB cable.

The general design and the firmware make the Libre Color a close relative of the Elonex 700EB I reviewed back in January. Actually, I’d say they are the same device only with different shells.

Format support includes MOV, AVI and MP4 (probably others, but that’s what I had on hand to test with). The video player app is basic (play, jump forward/back, rewind, fast-forward), and the image quality is acceptable.The viewing angle for the screen is decent but not amazing.

The Libre Color is using the same reading app as the 700EB, so far as I can tell. The only difference is that they seem to have fixed a few bugs.

This actually doesn’t have all that great of a reading app. It’s okay, but it’s also not displaying the ebooks correctly. I tested it with several hand made ebooks and the formatting was ignored. It also didn’t see the external table of contents in the Epub or PDF.

The only annotation option is bookmarks. But, you do have some customization options: screen brightness, font size (5), font color (6), background color (6), screen orientation, and zoom. It also offers a page jump option and auto page turn option.

It does support both PDF zoom and reflow, which is great. But you need to remember that if you reflow a PDF with graphs or charts, you’ll lose them. It will also remember your place when you exit an ebook and when you put it in sleep mode. But other than that it’s just a basic ereader.

Aluratek is listing it for $129, and I don’t think it’s worth that much. That’s not a whole lot less that the Kindle or Nook Touch, either of which have better features. Yes, it has a color screen and decent video, but if you look at it strictly as an ereader, I’m not sure how much weight you would put on the color screen. I don’t care one way or another.

I’m not sure I’m happy with how it’s displaying Epub, but that’s a complaint for a different post.