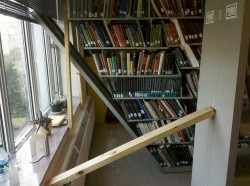 You probably recall that back in August the east cost was struck by an earthquake. It was a 5.9 magnitude quake with a locus inside the commonwealth of Virginia.

At the time of the quake I joked about the matter because it so mild that I didn’t expect any serious damage. It turns out there as damage to the Washington Monument and some other structures in downtown DC, including one of the Smithsonian Libraries.

The image at right is from the 4th floor stacks of the Botany and Horticulture Library. They lost 8 shelf sections to the earthquake. Do you see how the collapsed bookshelf is resting on the window? The window didn’t break because it’s made of bomb proof glass and was installed after 11 September.

If you look through this photostream on Flickr, you’ll get a better idea about the damage done. Only a fraction of the shelving units failed. 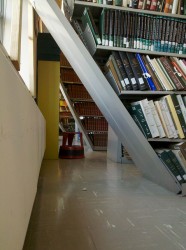 The photo at left illustrates it best. Note the stacks that are still standing. They’ll probably need to be replaced, but they haven’t failed yet.

If I wanted to be flippant, I could make a comment about how the quake didn’t knock over the electrons on my hard disk so my ebooks came just fine. That would be funny, yes, but there’s also an element of truth. The August earthquake is an example of why it would have been a good idea to have this content backed up as ebooks.

I would guess that a significant number of the books on these shelves have not been digitized yet.  If the windows had broken, at least some of the tomes would have fallen 4 stories to the ground and been seriously damaged. Yes, I’m sure there are other copies in other libraries, but how many? Also where are they? If the closest copy is in Cleveland, it’s not all that accessible to the researcher who came here to look stuff up.

If the above doesn’t inspire you to start a digitization project, I don’t know what will.

P.S. I happen to know that the Smithsonian has at least one digitization project going on, so I’m sure they know the value. But this earthquake is still an excellent example of why digitization is a good idea.