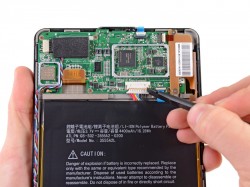 Still waiting for your Kindle Fore to arrive? (I am.) If you need something to satisfy your gadget lust then you might want to check out iFixit. They’re in the middle of tearing down the Kindle Fire.

And I mean that literally. They’ve already popped the back off and removed the battery, mainboard, speaker assembly, and other parts but they’re not done yet. Each image is getting posted when it is ready, one at a time. There’s no video, but they are effectively liveblogging it.

One reader pointed out that I should have looked more carefully, and not relied on the other blogs that reported there’s nothing to be found. The Wifi chip is actually a combo Wifi/BT/FM chip. That means there’s a chance that a hacked KF will have Bluetooth support. Of course, just becuase the chip is installed doesn’t mean all the pins are wired. Can someone check?

BTW, yesterday I posted the FCC teardown for the Kindle Touch.