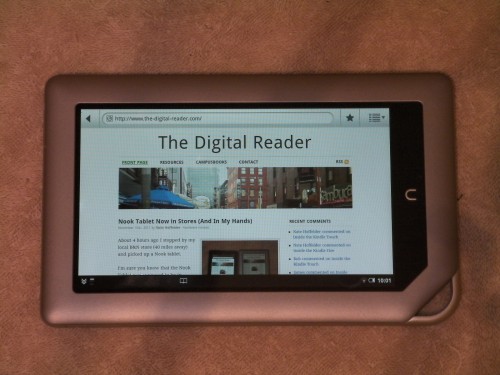 About 4 hours ago I stopped by my local B&N store (40 miles away) and picked up a Nook tablet.

I’m sure you know that the Nook Tablet was supposed to be in stores on Friday, but I guess B&N took a leaf out of Amazon’s playbook. Earlier today one reader tipped me that his store called and invited him to pick up his Nook Tablet. I checked with my store and they offered to take a pre-order and let me pick it up today.

Update: A couple blogs are already posting reviews. I haven’t read them yet.

Second Update: I found a way to install 3rd party apps. Now the NT is much more useful.

So I’ve had my Nook tablet for several hours now, and I continue to play with it as I write this post. It’s very pretty with a polished interface, sleek appearance, and it’s quite responsive.  I’ve successfully downloaded several ebooks from my favorite free ebook sites (that isn’t possible on the KF). And I’ve installed an app, browsed the web,  and tried some of the free samples included.

Everything is working nice, but I haven’t been wowed yet.

Yes, this is a polished tablet, but I’m not seeing anything that puts it head and shoulders above some of the other Android tablets I’ve put my hands on. It’s a nice ebook reader, and it’s a nice media device, but so are other tablets in this price range. I may have bought into the hype a little too much, but I’m really beginning to feel let down.

I’ve probably had my hands on more tablets (both good and bad) than almost any blogger. The better ones were almost as polished as the Nook Tablet, and some were even as pretty. But here’s the thing. I’m not seeing anything in the Nook Tablet that actually makes it preferable to the budget tablets I’ve had before.

Yes, it has a curated app store – which excludes all other reading apps. Yes, it has the latest Nook app – which I can download from Freeware Lovers. Yes it has Netflix and other media apps – which I can find elsewhere.

This is a very nice tablet, but at this point I’m planning to go back to the ones I already have.

BTW, I have been wowed by gadgets in the first few hours of owning them. Some of the devices that have wowed me right out of the box include the original Kindle, Asus Transformer, HP TouchPad (not kidding), as well as several other ereaders and tablets. So I can be impressed by a sweet tablet; it just didn’t happen this time.

P.S. If anyone wants to post a rebuttal, please do. Given the hype surrounding the Nook Color, I’m concerned that I might be the only one who is underwhelmed. That’s not good; it’s a sign that I may have missed something everyone else noticed. I really do not want to end this while still feeling underwhelmed by the Nook Tablet. If there’s something that might impress me, please point it out.