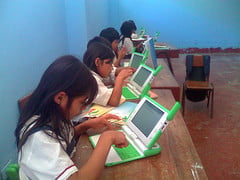 A report has been released this week which took a look at Peru’s OLPC project. This project has little to do with ebooks, but the educational, sociological, and technological aspects are fascinating.

The Inter-American Development Bank (IDB) commissioned a study (PDF) last fall which gathered info on 2 groups of schools in Peru, those with and without the new XO laptops. The researchers compared and analyzed the data and discovered that there was not a significant difference between the test and control groups.

While the students with the XO laptops showed a slight improvement, it was hardly the sea change that proponents of the program had predicted.

I came across the report in The Economist, and I’ll let them give the background on Peru:

Peru is enjoying an economic boom, but has one of Latin America’s worst education systems. Flush with mining revenues, the previous government embraced the laptop initiative. It spent $225m to supply and support 850,000 basic laptops to schools throughout the country. But Peruvians’ test scores remain dismal. Only 13% of seven-year-olds were at the required level in maths and only 30% in reading, the education ministry reported last month.

This report has a back story to it that I don’t think most people are aware of. For some time now there’s been a debate in the OLPC community over how the XO laptops should be deployed.

I’ve been following the discussions for a couple years now, and in all that time there have been 2 camps with different ideas on how to distribute the OLPC laptop. One is to simply give out the devices (parachute), and the other is to help a target country change their education system.

Nick Negroponte, founder of the OLPC non-profit and the man who is credited with the idea for the XO laptop, has long been an advocate for the parachute approach. He and others believe that you can simply give kids XO laptops and they will teach themselves. In fact, you might recall all the news from last fall when Negroponte proposed doing exactly that. He’s going to have pallets of the XO-3 tablet dropped by parachute into remote villages.

The other approach to distributing XO laptops is to also send in educational experts to help retrain teachers, principals, and students in better ways to use devices so the students will learn more. This approach requires an on the ground presence and is a lot more work, so it doesn’t have the appeal of the magic wand that is the parachute approach.

This debate has been going on since at least 2009, and while I don’t know if it has been resolved internal to the OLPC community, I suspect that the report from Peru is going to add heat to the fire. It would seem to me that this report disproves one of the approaches.

Two details I picked up from this report is that the investigators didn’t find any significant improvement in the rate at which students learned, nor did they see a major shift in how the teachers taught. This sounds to me like Peru, however inadvertently, went for the parachute approach. All they provided was the XO laptops (and tech support), but they didn’t try to change how teachers did their jobs. The devices were slotted into existing lesson plans and thus any benefit was minimized.

But there is one detail in the footnotes that might disprove my conclusion above. The vast majority of teachers who received XO laptops for their class also got 40 hours of training in how to use them in the classroom. Either the training wasn’t enough, or it covered the wrong material, because it didn’t appear to have had any effect.

I think the one time training still makes the Peru OLPC project an example of the parachute approach. There’s no indication in the report that the government of Peru put effort into continuing to share info with teachers after the initial training period was over. (I should point out, though, that I don’t have all the info on Peru project, just what is in this report.)

In any case, what we see in this report is that the tech that the gov’t of Peru distributed to the schools isn’t being used effectively (never mind why). That’s a pity, because it’s something that could have been prevented. The effective use of technology in the classroom is a heavily studied topic. You just have to know who to talk to.

A few weeks back I attended CoSN, a high level policy conference on tech in schools. One of the sessions I attended on the last day was given by Bernajean Porter, and she has been consulting with schools on with very issue for the past 5 years.  She’s worked out a system to classify how effectively schools are using the tech they have.  The whole thing is rather long, but it can be boiled down to 3 categories:

When you explain to a student how to use a device, you are teaching the tech. When a student uses an XO laptop to type up a paper which they would have written out by hand last year, they’re using the tech to teach the same old lessons.

The true growth comes from the third category. Unfortunately for anyone enamored of the parachute approach, it requires a lot more work over a long period of time.

If you want to achieve academic improvement on the scale of the Peru OLPC project, it’s going to require a significant investment by the government in leading their educational system down a new path. That’s not something you can do in a single year or by simply deploying XO laptops to schools.

It’s also not pretty, but it is the only way to move forward.