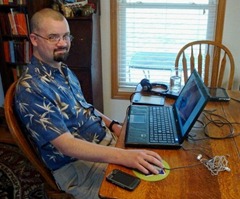 Hello, everyone. Those of you who’ve been following e-reading for a while might know me as former Senior Writer for TeleRead.com, where I’ve been for the last six years. I talked a little about the history of e-reading that happened during the six years I was writing there in my farewell post to the site.

For my inaugural post here, I thought I would go into my own personal e-reading background and what my hopes are for the future of e-books. Once you know where I’ve come from, then you can follow where I’m going. Let’s begin.

”Damn fashion technology.” Those are the words that ushered in my love affair with digital reading devices. (I had actually been involved in digital reading (and writing) from computer screens for several years, thanks to several Internet writing circles I participated in, but that’s another story.) I can no longer remember the exact circumstances, but I know that Salon Magazine’s 1998 article on the Palm Pilot impressed the heck out of me.

Here was a little hand-held green glowy gizmo that could contain words. Lots and lots of words. And it wasn’t just a toy—an unnamed professional SF editor used it to help get work done. If it was good enough for him, why couldn’t it be good enough for me? It was a few months before I was able to get one of my very own, but very soon a Palm IIIe, whose memory chips could hold an unimaginably large 2 whole megabytes, was mine. (I’d already bought my first commercial e-book from Peanut Press: Vernor Vinge’s A Fire Upon the Deep, which occupied fully 2/5 of my Palm’s memory all by itself!)

Then I realized that I had ordered too soon, because just a couple of months later the ultra-cool Handspring Visor Deluxe was available—and I had to have it! It had 8 megabytes, and expansion slot…and most importantly of all, it looked like the hand-held gadget Dean Stockwell was always whacking on Quantum Leap. For a time, I actually kept and used both devices, with the help of a ridiculous gizmo called the Happy Hacker Cradle that let me attach a full-sized PS2 keyboard to the IIIe. I carried it around to my college classes and took notes on it, to the general distraction of all around me. (Eventually sold it to one of my friends and kept the Visor, which I used with one of those little folding laptop-style keyboards.)

And I really loved them both! It’s hard to imagine now, given that the 160×160 devices had the approximate resolution of a pocket calculator, but I happily read for hours and hours on them. I bought dozens of e-books, mainly from Peanut Press/Palm Digital Media/eReader (including splurging something like $200 on the entire Survivalist series by Jerry Ahern—I couldn’t help it; once I read the first one I couldn’t stop!) and Baen. (My preferred e-reading app for Baen was iSilo, because I didn’t like how MobiPocket wasted space with margins.)

I eventually broke the Visor and moved on to the similarly PalmOS Sony Clié PEG-T415. Unlike the Palm and Handspring, the 415 actually had 320×320 resolution, like to the 320×480 used by the first few generations of iPhone and iPod Touch, but greyscale. (Weird thing. I used to love reading off that gizmo—but when I had the chance to see another one lately, and try reading from it, I could barely even make it out without eyestrain. I’ve been spoiled by color LCD.) That eventually died, but a couple of years later my boss gave me a PEG-N760, which was kind of like the T415 but in color instead of black and white.

After that died, too, while I was writing for TeleRead, I got a Nokia 770 and experimented with it for a while. It was all right, but kind of cantankerous. But then, I got my first iPod Touch (first-generation) and was blown away by how easy it is to read on. And while I now have a first-generation iPad, my second first-generation iPod Touch, and a Kobo e-ink reader I got at a Borders close-out sale, the iPod Touch is still my greatest love for pocket-sized reading.

It can hold pretty much every book I want, read any format I want, and it fits in my pocket where it will always be when I need it—to pull it out in line at the grocery store, or in the breakroom at work, or at the dinner table, or anywhere else I need it. Thanks to my pay-as-you-go MiFi, for the last 8 months I’ve been able to get the net on it wherever I was, too, which meant I could actually download an e-book I wanted if the urge took me. Someday I want to upgrade to a more modern, retina-enabled iPod Touch—but my old first-gen beater is still my constant companion, and they’re a great bargain for anyone wanting a library that fits in an actual pocket.

Apart from screen size and operating system, one of the most interesting dividing lines for me in these devices is wi-fi. Everything I had before the Nokia 770 didn’t have it, but the 770 and after did. It really was a sea change in how we used the gadgets.

Now that wi-fi has become not just something you might be able to get but something that comes standard on almost every portable digital device now, I think this has really changed the nature of what it means to e-read. In the old Palm days, you bought books and loaded them on your device. Depending on how big the book was and how much memory you had, you might be able to have a few dozen e-books on-hand at a time. What an embarrassment of riches! (Of course, back then it really was. All hail Moore’s Law!) Non-e-book reading was limited to webpages you reformatted with an app like iSilo, or web pages you synchronized to AvantGo (an early precursor to today’s reformatting services like Readability or InstaPaper, which often took forever and a day to pull down and process site content).

Today, of course, you have the web in your pocket as long as you’re near a wi-fi hotspot—or anywhere if you’ve got built-in 3G or a MiFi. (Indeed, it might have been 3G, more than wi-fi, that helped e-books first take off with the launch of the Kindle, since it put a bookstore in one’s pocket even when nowhere near a hotspot.) Reading isn’t just e-books, but newspapers, magazines, and the whole of the web.

You could even make the case that social networking is e-reading, or at least e-reading’s first cousin, since every social network post is just words on a screen. (And, of course, so much of social networking now is links curated by your friends, which you can feed into an aggregator like Flipboard and have your very own personal “me-gazine”.)

And this has, of course, thrown the world of publishing into a tizzy. Not just book publishing, but newspapers, magazines, even classified ads—anything that can be read on-line is losing a big chunk of its print audience. Not all of it, by any means—there are still plenty of people left in the older generations who just don’t “get” e, and there will be for decades to come—but on a lot of these things the margins are thin enough that losing even a chunk will hurt out of proportion to the percentage lost. And nobody’s really figured out any ways to monetize Internet advertising that provide the same dollars-per-eyeball as the old print ads, so the more people shift over, the more money leaches out of the system.

Figuring out how to deal with this is going to be one of the next big challenges facing the world of publishing, and I expect one way or another it will be solved within the next ten years—either by coming up with a successful way to monetize digital eyeballs, or by struggling magazines and papers simply going out of business and being replaced by something else.

Major book publishers are struggling with the same kinds of issues, what with Amazon’s pricing practices and the Department of Justice anti-trust actions over agency pricing. It’s going to be very interesting to see how the e-book market evolves over the next few months, what with half of the Big Six meekly settling on agency pricing and the others either legitimately continuing to use it or fighting it out in court. Then there will be further changes in two years as the settling publishers are allowed to use it again. I’m not sure what’s going to happen here, but it’s probably going to be full of surprises.

And what’s the next big device change that will affect e-reading? I think it’s going to be the fully-capable tablet, as exemplified by Microsoft’s Surface. This could be the first time that a tablet or netbook is powerful enough to run a desktop operating system in exactly the same way it runs on the desktop. The Surface probably won’t do it perfectly, but it will be the beginning of a trend toward developing devices that do.

Up ‘til now, most successful tablets have used simplified, lower-powered versions of desktop operating systems—and while many have been able to use them to replace laptops or desktops for a lot of the tasks they do, they haven’t replaced them completely. And we’ve seen desktop e-reading apps (Amazon Kindle, Barnes & Noble eReader, etc.) intended to be used as adjuncts to portable devices, and a few terrific web apps (like one of my current favorites, IbisReader) that also let you read on the desktop, but very few desktop apps that have tried to be the main way for people to read e-books. What kind of improvements to e-reading might we see once the full power and complexity of a desktop operating system is on a pane of glass in someone’s hand?

Anyway, those are some of the devices that have shaped my e-reading experience, and some of the aspects of e-reading’s present and future that most interest me. I’ll be keeping an eye on these and many other things here in my tenure at The Digital Reader.