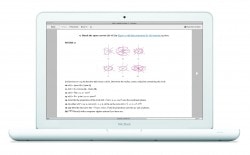 Amazon talked gadgets last week but today it’s the apps which are getting a little love.

There’s a new update for the Kindle OSX app in iTunes today. Not only does it add support for OSX Lion gestures (panning and swiping), but it also adds the long awaited KF8 support and more.

Amazon is reporting that the app has better support for larger Kindle libraries, and the update note also mentions various bug fixes and performance improvements. But the important news today is the support for Japanese.

Amazon has long been expected to launch the Kindle Store in Japan, and back in June they even went so far to post a signup page on the Amazon.co.jp website where readers could be notified about the launch when it happens. And today OSX users can get a taste of the new Japanese support for Kindle. The OSX app is the first Kindle app to publicly have this support for Japanese characters, and so far as I know this app has even beat out the Kindle devices.

Of course, this is just the first app to publicly have support for Japanese; for all we know Amazon added support to other apps with past updates but did not mention it. Since I don’t have any Kindle ebooks in Japanese, I’ve never been able to test. All the ebooks I could have used were in EPub3, and there’s way to guarantee that Kindle Gen will convert it properly.

I wonder how complete the support really is? As you might know, Japanese text can be displayed in both vertical and horizontal layouts. If someone wanted to cut corners, they might only support the horizontal text (it might be easier to render). But from what I’ve been told, the Japanese book market really requires both layouts.  There are many existing titles which have already been formatted for vertical text, and it sounds like either publishers or readers will balk at changing to horizontal text.

If anyone does try the new app, please let me know how well it supports Japanese. If you need a Kindle ebook to test, you can find one in the Epub3 archive.