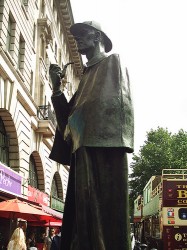 I have long argued that copyright law has grown far out of proportion and no longer serves the needs of the creators, so I was pleased to read this week about a recently filed lawsuit that could prune back some of the overgrowth.

Mr Klinger is suing (according to the press release) because of the pressure that the Conan Doyle estate applied against Mr Klinger’s latest anthology of Sherlock Holmes inspired stories.

In the Company of Sherlock Holmes was supposed to be published by Pegasus Books and included Holmes stories by numerous well-known mystery/sci-fi/fantasy authors.  The anthology is on hold because the Conan Doyle estate contacted the publisher, asked for a fee, and threatened to block distribution of the anthology if the fee was not paid.

The Conan Doyle estate’s justification for their legal shakedown is at best questionable and is based on a not-entirely settled point of copyright law. Allow me to explain.

As you probably know, the vast majority of the Holmes stories are old enough that they are no longer in copyright in the US. (The author died in 1930, so his entire body work is public domain everywhere but the US.) In the US you can legally download nearly any of the Holmes stories from sites like Project Gutenberg. If you wanted to, you could then format the stories as ebooks or bind them into a paper book and sell the stories. This is completely legal.

But according to the Conan Doyle estate, one thing you cannot do is write a new story that features Sherlock Holmes. There is exactly one remaining Conan Doyle book, The Case-Book of Sherlock Holmes, that still contains copyrighted Sherlock Holmes stories – 10 stories, in fact. Because some of the original stories are still in copyright in the US, the estate believes that they can control who writes new stories. They are using that control to collect fees from publishers, studios, and anyone with deep pockets.

This is not the first time that I heard about the Conan Doyle estate collecting license fees. Star Trek: The Next Generation paid off the estate back in the 1990s. That tv series made 2 episodes that references Sherlock Holmes, and they paid an unnamed fee each time.

What’s more, even the editors currently suing the Conan Doyle estate have paid the fee before when publishing a collection of newly written Sherlock Holmes stories. They’re just not willing to submit to the extortion this time (I think it may have been the alleged threats that tipped the scale, or possibly the size of the fee demanded by the estate):

“The Conan Doyle Estate contacted our publisher,” says Klinger, “and implied that if the Estate wasn’t paid a license fee, they’d convince the major distributors not to sell the book. Our publisher was, understandably, concerned, and told us that the book couldn’t come out unless this was resolved. “

Unfortunately for the estate, their interpretation of copyright law is arguably not supported by a plain text reading of current law. US copyright law protects a work as a whole, not the elements in a work.

Or at least that is one interpretation, and it is the legal argument that these editors are presenting in their lawsuit. I tend to agree with the editors because if you take the counter position to its logical conclusion then it is revealed as false.

Does that make any sense? I don’t think so, and I am sharing that conclusion in order to offer a simple explanation for why the character is not under copyright.

In any case, it doesn’t matter what I believe. What matters here is what the judge decides.This case was filed in the United States District Court for the Northern District of Illinois, and if appealed will go to the Seventh Circuit Court.