Tumblr has faced some issues in its 6 years as a blog hosting service, but none were serious enough to stop it from setting a new milestone today. According to the Tumblr about page, the service is now home to over 100 million blogs: 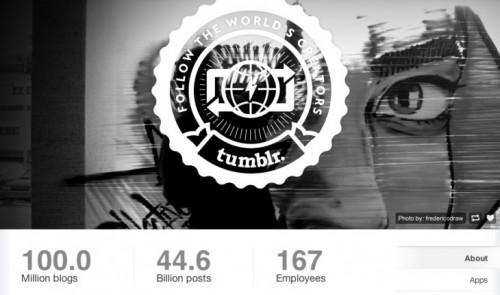 Tumblr’s last milestone was in April 2012, when the service reached 50 million blogs for the first time. In just under a year Tumblr has matched has doubled in size. And as you can see in the screen shot above, well over 44 billion blog posts have been published on Tumblr, with 80.2 million published today.

This is all the more impressive because Tumblr has far outgrown the best-known blogging service, WordPress.com. That site currently supports 63 million blogs,with around 39 million blog posts and 41 million comments going live each month. Of course, part of the reason why the WordPress stats look so anemic is that they don’t include the many millions of self-hosted WordPress websites (like this one, for example), just the sites hosted on WordPress.com.

One important difference between Tumblr and WordPress is that the former can’t be set up as its own website. All Tumblr blogs are hosted by Tumblr.