When Onswipe launched just over 2 years ago it was the self-proclaimed solution to tablet publishing. Bloggers and news sites were supposed to sign up and Onswipe would display their content on tablets  while also helping the publishers monetize via ads.

I didn’t believe the hype at the time (I still don’t), but now that 2 years have passed it’s beginning to look like I was right all along. There’s a new blog post on the Onswipe blog today, touting their success, but when you put their numbers into perspective it looks like hardly any websites are using the Onswipe service. 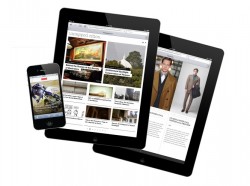 The data comes from Onswipe’s new Sage report, which also tells us that the 127 million reflects only the 94% of Onswipe’s userbase that own an iThing. I’m pointing that detail out because it reveals that Onswipe’s non-iThing penetration stands at 8 million and change, which is a rather paltry number given the hundreds of millions of tablets made in the past couple years.

But when it comes to iOS devices, Onswipe is having a much higher degree of success. Should you choose to copy Onswipe and myopically ignore the rest of the tablet market, that 127 million would look very impressive against the 380 million to 400 million iOS devices* made in the past couple years. Even I am impressed with that comparison.

Or at least I would be if not for the fact that I read the rest of the slides for this report (you can find them on Scribd), and I noted what Onswipe isn’t sharing with us. For example, they haven’t released any figures on how many websites that are currently signed up for the service, nor have they indicated how many monthly users they have.

Given that Onswipe describes itself as being “the media platform that powers the way the world experiences the web on tablets”, don’t you think they should give us figures to actually back up that claim?

I think so, but I suspect that the figures would not be nearly as impressive as the 127 million. What little info I do have is underwhelming.

The latest info on Onswipe’s userbase dates to December 2012, when Techcrunch reported that Onswipe served content to 10 million iOS devices per month. Given that there are hundreds of millions of iOS devices in use right now, I would argue that the 10 million figure** does not fit with the claim that Onswipe is the “the media platform that powers the way the world experiences the web on tablets”.

Once you sort through the grandiose claims, peel  back the hype, and really look at the facts, I think it’s pretty clear that Onswipe’s actual effect on “the way the world experiences the web on tablets” is negligible at best.

* My quoted estimated number of iThings made in the past couple years is based on Apple’s own press releases (339 million), plus a fudge factor for the past few months. It includes iPads and iPhones. Onswipe added support for the iPhone a year ago so I thought it reasonable to include that device as well.

** Double that 10 million and it is still unimpressive.