13.3″ writing slate is expected to hit the market with a flexible plastic screen and thousand dollar price tag, putting it out of the reach of most consumers (and even a lot of businesspersons). Luckily for us, Pocketbook has just revealed a less durable (but also cheaper) alternative.

Meet the Pocketbook CAD Reader. This ebook reader might share its screen size with Sony’s writing slate but that is about all that the two devices have in common.

The Pocketbook CAD Reader has a 13.3″ screen with a resolution of 1600 x 1200, but rather than use the flexible Mobius E-ink screen the CAD Reader instead uses the new Fina E-ink screen. This screen tech replaces the plastic backplane with a glass backplane similar to the one used in 6″ E-ink screens. 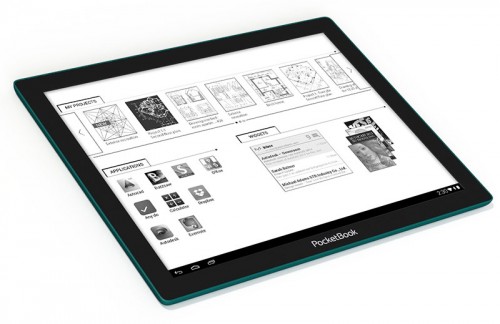 The Pocketbook press release mentions that it has a 10:1 contrast ratio, suggesting that this screen is closely related to Pearl E-ink screens (and not the newer Carta E-ink screens).

Update: The E-ink press release, which just arrived in my inbox, says that the Fina screen uses a glass backplane that is thinner and lighter than that used on earlier screens.

The PocketBook CAD Reader is going to be running Android 4.0.4 on a dual-core 1 GHz CPU with 2 GB RAM, 16 GB Flash storage, and an 8Ah battery. This is going to make it (possibly) the single most powerful ereader on the market. Of course, we don’t know the specs for Sony’s writing slate, so I cannot guarantee that claim.

The CAD Reader will also have Wifi and 3G connectivity, as well as a Wacom touchscreen and a capacitive touchscreen. Sony’s writing slate is similarly equipped with dual touchscreens.

There’s no info on price or release date, but I do know that the CAD Reader will be shown off at the Autodesk University later this week in Las Vegas, NV. It will probably also make an appearance at CES 2014 in January, but that has not been confirmed.

If the screen shots and conference schedule are any indication, Pocketbook is probably aiming for the same market as the Zephyr, the 21″ device that is intended to display blueprints. The Zephyr gets its prodigious screen size by combining four 10.7″ Plastic logic screens, and is large enough to hide a small child.

Both the CAD Reader and the Zephyr are aimed at the construction market, and that makes me wonder just how much research these companies did.

As I mentioned in an update to the post on the Zephyr, I ran this idea by a construction engineer who pointed out that there was no need for a new device to display digital blueprints – that’s what tablets were for. All the places she has worked went digital years ago and use either tablet-convertibles or out and out tablets.

She doesn’t see the need for a limited function device like the Zephyr or the CAD Reader, not when the budget already covers tablets and laptops.

If her assessment is correct then this is going to be a swing and a miss for Pocketbook and Plastic Logic. But on the upside at least with the CAD Reader consumers stand a chance of getting their hands on it at a not too unreasonable price. I’m looking forward to it.