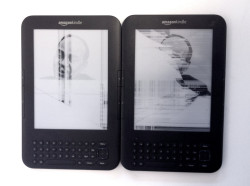 Counting the Sony Data Discman, ereaders have been around for over two decades but the market only really exploded in late 2007 with the launch of the Kindle.

And now, 7 short years later, some are already predicting its death. And while it might shock you to hear an ebook fan say this, they’re not entirely wrong.

From what I have seen and been told by contacts at device companies, the ereader market is in a decline.

And that’s why when I read this week that Mashable is ready to hold a wake for the ebook reader, I was not surprised. They’re noting that the major US companies are trying to get out of the market as analysts project that it is going to decline:

The outlook for e-readers, however, is more dire. Forrester forecasts that e-reader sales will fall to as low as 7 million in the U.S. by the end of 2017, compared to a high of 25 million units in 2012.

“Those 7 million will be the people who read more than two books a week,” says James McQuivey, principal analyst at Forrester. “Tablets and phones have already begun the process of making e-readers a ‘nice to have.'”

McQuivey thinks Amazon will eventually give Kindles away as a thank you gift to consumers who renew their Prime memberships. (An Amazon rep did not respond for a request to comment on this, and the company hasn’t made any such claim publicly.)

I don’t know how accurate that analyst’s predictions are, but I would bet they are not too far off. As you might recall, E-ink makes most of the ereader screens in the world and they have been reporting steadily declining revenues over the past several years. In the two most recent quarters, for example, they lost money in one quarter due to a seasonal drop in screen productions and only turned a profit in the other quarter because of royalties.

E-ink is simply not making as many ereader screens as they used to.

Nevertheless, when I read pieces like the one in NY Magazine the other day I might agree with the trend but still can’t help but roll my eyes at the people who want us to put in pre-orders for sack cloth and ashes. In a post which starts off by misunderstanding the publishing industry and recent statistics, Kevin Roose argues that:

The death of the standalone e-reader might be good news for consumers, who will have one fewer gadget to buy and lug around. But it’s bad news for the book industry. If you’ve ever tried to read a book on your phone, you’ll know why. Reading on an original Kindle or a Nook is an immersive experience. There are no push notifications from other apps to distract you from your novel, no calendar reminders or texts popping up to demand your immediate attention. And this immersion is partly why people who use dedicated e-readers tend to buy a lot of books. (One survey indicated that e-book readers read about 24 books a year, compared to 15 books a year for paper-and-ink readers.)

E-book sales aren’t necessarily correlated with the popularity of standalone e-book readers, and the publishing industry could still have a successful digital transition if it convinces iPhone and Android users to buy e-books in the same quantities as Kindle and Nook users. But there’s no getting around the fact that smartphones aren’t designed for focused, sustained reading. They have small screens, for starters, which make long reading sessions tough on the eyes. But the bigger problem is that smartphones breed short attention spans. On a phone or a multi-function tablet, e-books have to compete for attention with Facebook, Instagram, Pandora, Angry Birds, and everything else you do. It’s the difference between watching TV intently, and watching TV while folding laundry, talking on the phone, and doing the crossword puzzle.

Mr Roose got his causality all turned around. He seems to think that having an ereader turns readers into heavy book buyers, when in reality it’s the big spenders who got into ereaders because the portability justified the cost. (Also, heavy reader =\= heavy book buyer.) Mr Roose would be just as wrong if he assumed that buying a gaming console would turn someone into a heavy gamer.

Most heavy ebook buyers were already heavily invested in paper books; we simply shifted our buying habits. Many other readers wanted to be into books but lacked the time or space for paper books.

Really, what Mr Roose seems to have missed is that the people who are into ereaders now saw the technology when it first appeared, and made a conscious choice to adopt it and use it to read. Give those people a tablet and I would bet that many will choose to use it to read.

In short, gadgets come and go but book buyers tend to stick around for a lot longer than whatever device is the latest fad. Or am I wrong?