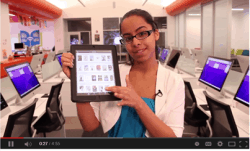 –Read an e-book at home or in the library, or a digital comic or graphic novel.

–Maybe even read E to your visiting  child if you’re a jailed mother.

–Use two-way Google Hangouts video to enjoy a virtual book club without leaving your house. Or go to the same event in person and see yourself later on YouTube.

–Prepare for SATs and other school tests, or reserve a meeting room to work with friends on school projects.

–Learn a new language or sharpen your computer skills.

Those are some of the services that BiblioTech, the all-digital library in Bexar County, Texas, is offering. And you can watch in the video embedded below to understand better what BiblioTech is up to. Hear the music throb. The video, a gem from the Film School of San Antonio at Harlandale High School, is right on target for a young Hispanic audience. Perhaps other library systems can come up with variants using local film-making talent.

From afar, I see other good signs. More than eight months after BiblioTech opened, staffers are holding frequent in-library events, especially story times for kids, and are not just parking patrons in front of the computers. The library has doubled its e-book collection from the original 10,000—still a fraction of what national digital libraries could offer, but definite progress.  Go here for LibraryCity’s earlier mentions of BiblioTech.

Jailed moms reading to their kids

Is the BliblioTech model right for all communities? No. But with an Apple Store-like interior, BiblioTech makes young people and minorities feel at home in an area underserved by regular libraries. BiblioTech even enables jailed mothers to read e-books to their kids when the children visit. “Stay connected through reading” isn’t in the above YouTube—the young woman holding up the iPad in the video is narrator Mariah Espinosa, not a prisoner!—but how could I not mention it in the headline? What a wonderful example of a library reaching out to the community.

What’s more, BiblioTech is getting in sync with the schools. In a pilot, 16 students at Carroll Bell Elementary School were loaned Nook e-readers. Both kids and parents received training. So, so clueful an approach. Students had to return the Nooks at the end of the school year, but reportedly “can check them out again from BiblioTech for the summer.”

BiblioTech even lets you read e-books in Braille.

As of February—I intend to get an update at some point—several hundred people a day were using BiblioTech on the average.  Perhaps even localities  with established library systems might consider experimenting with a Bexar-style approach in some library-short and dangerous neighborhoods, where parents don’t want their kids walking home after dark but may not be able chauffeur them. E-books could make a huge difference, whether from a BiblioTech-style  library or a traditional one. The librarians could teach the kids about them during safe hours, and help them stock up with good reading at the library if they didn’t have WiFi at home.

Via YouTube I watched the first BiblioTech book club held on Google Hangouts. A hint of the possibilities for my own city, Alexandria, Virginia?

My big hope is that Bexar and other libraries will pay more attention than now to the interests  of male readers and  play up plenty of nonfiction as well as novels. How about real-life adventure stories or biographies of Latino sports heroes, for example? I’m also curious about local high school coaches and other local athletic  figures helping to talk up  books and participating in book clubs.

If that happened, promo videos like Bexar’s could mention sports angles and others of interest of young people. This would be a great way to increase participation in the clubs. Nothing against good literature—just the reverse! But the big priority should be to boost engagement with the community at large, not merely the kinds of people most likely to be library regulars. Interest in literary novels can come eventually for many new patrons. Maybe it’s even time for a graphic novel book club. Besides, who says some popular-level books can’t also be good literature in their own ways?

reposted under a CC license from LibraryCity