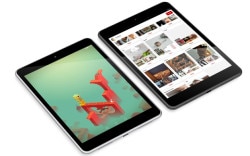 Between everyone and their life coach releasing new models, the excess of refurbished, and last year’s leftovers, the Android tablet market is glutted with an excess of supply. But that hasn’t discouraged Nokia.

The gadget maker announced today that they are launching their first Android tablet. The N1 is an iPad Mini clone which will run Android 5.0 Lollipop when it ships in China later this year.

Next to the screen you’ll find a 5MP camera, and on the back is an  8MP camera. The N1 has 2 speakers on the bottom edge, and I bet you can guess where the buttons are ports are located.

As you can see in the images below, calling the N1 an iPad Mini clone is not a joke but a near literal description:

The Verge reports that Nokia plans to launch the Nokia N1 in China for $249 in February ( around the time of Chinese New Year) The tablet will roll out to Russia and select European countries after the Chinese release.

As Mike Cane pointed out, that is overpriced for the Chinese market and represents a “fifty-percent price premium over other China iPad Mini clones”, of which there are literally dozens.

The price differential won’t matter so much in Europe, but even in the West the N1 will still have to compete in a tight market which includes similarly powerful tablets like the Z3580-equipped tablets which Asus announced in June.

If I were a betting man, I would guess that Nokia will do about as well with the N1 as they did with smartphones. But to be fair, it’s not like Nokia had another choice for releasing hardware; their existing Lumia tablet designs went to Microsoft along with the sale of Nokia’ smartphone division.