As 2014 draws to a close so does the final chapter on Irex Technologies, one of the early ereader makers.

Yesterday a reader tipped me to the news that the Dutch screen tech startup IRX Innovations has gone bankrupt. IRX was formed in 2010 from the remains of ereader pioneer Irex Technologies, and was for all intents and purposes the same company with new investors and a new name. (Thanks, Zetmolm!)

Public documents confirm that IRX was handed over to a receiver in October 2014. According to reports filed about a month later, the company is kaput. It’s not clear what will happen to the assets, but the company won’t be coming back under a different name. (Thanks, Huub!) Its website has been turned off, and all of the employees have probably found jobs elsewhere.

And that’s a shame, because IRX was working on some interesting screen tech.

I haven’t had reason to write about them recently, but I have been following the details shared by the IRX marketing dept. According to one of IRX’s suppliers:

Currently, the IRX team is developing a new innovative color solution built on their electro-osmotic technology for electronic paper displays, that places three switching layers on top of each other. Each layer can electrically switch to its required color (cyan, magenta or yellow) or be 100% transparent. So for example, for a white image, all three layers become transparent. Light passes through all the layers and is reflected by a reflector placed behind the layers creating extremely high brightness, far greater than is possible for current systems. When creating a certain color, the technology controls the required amount of color particles in each of the layers. The result is a color performance comparable to printed paper.

That sounds neat, but I haven’t found any evidence that IRX ever got beyond displaying a single color (that’s why I haven’t written about them).

While there was some talk of 3-color screens at SID Display Week 2013, the only videos posted to Youtube show show grayscale screens which look similar to E-ink screens.

So at this point it’s really not clear whether this 3-color electro-osmosis screen tech ever actually existed in the lab, much less had any practical value.

And thus ends the second life of an ereader pioneer.

In its first life, IRX got its start as a project at Royal Philips (aka Koninklijke Philips, or simply Philips). 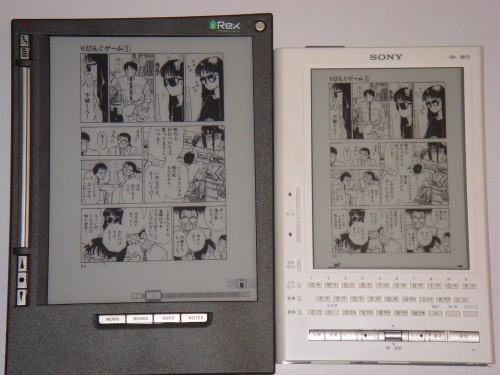 Philips was instrumental in developing the 6″ E-ink screen for the Sony Librie, which launched in Japan in 2004. That R&D effort also led to the development of an 8″ display which had a screen resolution of 1024 x 768 (the same resolution as on the Cybook Ocean). Irex was spun off of Philips with the plan to develop an ereader based on that screen.

The Irex Iliad ran an open version of Linux on a 400MHz CPU with 64MB RAM and 256MB internal storage. It didn’t have a frontlight (this simply wasn’t possible in 2006) but it did have a Wacom touchscreen and Wifi. According to Wikipedia, the Iliad cost 599 euros when it shipped in 2006.

Here’s a short video from 2007 which shows some of its features:

While it had software ahead of its time, the Iliad was in some ways a clunker with a hardware design that didn’t quite live up to its promises (battery life, for example), although the later models with revised hardware did come close.

I can recall from the user reports in 2007 and 2008 that it was much more of a hacker’s project than a consumer product; the more interesting reports all came from the developers who added their own software or tweaked Irex’s software to improve performance.

Irex’s later products were much better, although I’m not sure they were as popular.

Irex released several more ereader models before going bankrupt in 2010. In what would be better termed as a reorganization, the assets were bought by IRX Innovations and all of the existing employees keeping their jobs.

They weren’t so lucky the second time around.