For the past three years Amazon has sold a particular type of Kindle format called Kindle Print Replica. This is basically a PDF file wrapped in a Kindle ebook file, and it offers many of the benefits of PDFs (fixed layout, graphics, charts, discrete page numbers).

Today Amazon launched a new tool to let authors and educators make these PDF-ish ebooks. it’s called Kindle Textbook Creator, and it’s not to be confused with Amazon’s other ebook creation apps (for comic books and kids books). 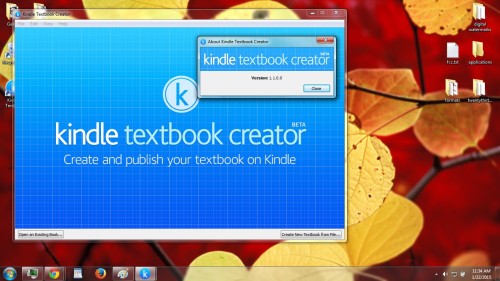 Besides the fact that the other apps make a different flavor of Kindle ebooks, the output of the Kindle Textbook Creator cannot be read on a Kindle – just on the Kindle apps for Windows, OSX, Android, iOS, etc (or so says the FAQ).

That’s going to limit the usefulness of any textbook made with this app, but I don’t think that will matter much. If you really want to get a PDF on an E-ink Kindle, you can of course side load it and read the PDF directly. And with the digital textbook market effectively stillborn, there’s really not much of a market to miss out on.

Update: A commenter over at The Passive Voice caught a nuance which I missed:

And professors everywhere just realized they can write their own course and/or supplementary texts and sell them via Amazon (and require them for their courses, of course). And keep 70% of the sales price.

The “supplementary course material” required purchase jig has been going on for years, ofc, but for until now it was limited to spiral bound books purchased from the local Kinko’s. I don’t think the professor made as much money on the old fashioned paper ones as he/she will on Kindle versions.

Now that is a market which could readily be switched over to the Kindle from whatever print shop is currently supporting it. What’s more, those course materials could fit nicely under the $9.99 cap for the 70% royalty.

In fact, I would suggest that this app is less about making textbooks for the Kindle than it is for making a Kindle version of all the other educational materials that a teacher might use in a class and pass out to her students.

There may not be much money in digital textbooks but there is value in getting teachers and students to use the Kindle apps; this keeps them in reach of the Kindle Store where Amazon can sell them other ebooks.

Have you used the app yet?

I’m planning to play with it this evening. I would like to find out just how many PDF features are supported. For example: