Augmented reality books may not have taken the larger book market by storm, but as we can see from the following Kickstarter campaign their time may have come. 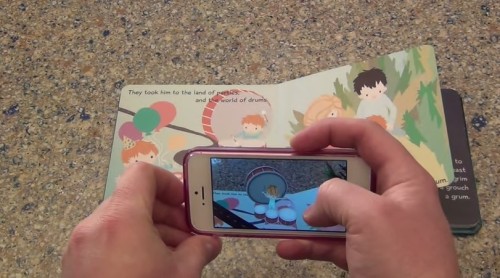 Good Night Lad is a new project by Apple developer Brad Grimm of Giveway Games which combines a traditional kid’s picture book with a companion app running on your smartphone. The book tells the tale of one boy’s night time adventures, all brought to life via the magic of augmented reality.

The paper book tells a good story on its own, but it only shows about half the fun. Point a smartphone running the companion app at the book and it will come to life:

I just read about this campaign today. It’s two days in, and the project has already passed its goal of $7,500.

While that’s great news for Brad and all the other parents who want to buy this book, this campaign caught my eye because of how little it cost to fund this project.

I first saw this tech in 2010 when S&S released bonus content for The Search for Wondla, a kid’s book. At that time a major publisher was required to fund the development of a web-based solution which worked not with a smartphone but with your webcam. That required installing a Flash app which, by the time I got a chance to try it in 2012, had stopped working because it hadn’t been updated.

Four years later, and not only is the tech easier and more convenient to use, it’s also a heck of a lot cheaper.  An Apple developer can crowd-fund an app for less than $10,000.

That’s not pocket change, but it is small enough that money isn’t a limiting factor any more. Now the technical and artistic skills of the development team are more important, and that means the only real limit on how augmented reality is used in books is the need for a clever idea and a good way to tell a story.