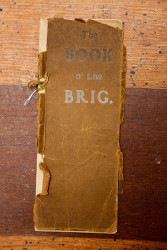 Arthur Conan Doyle penned 60 Sherlock Holmes stories in his lifetime – or so we thought yesterday. Historians have recently discovered what could be a previously unknown Holmes story.

The Telegraph reports that a Holmes story has recently been rediscovered tucked away in an attic:

An historian has unearthed the first unseen Sherlock Holmes story in more than 80 years that Sir Arthur Conan Doyle wrote to help save a town bridge.

Walter Elliot, 80, found the 1,300-word tale starring the famous detective in a collection of short stories written for a local bazaar.

Originally published in 1904, Sherlock Holmes: Discovering the Border Burghs and, by deduction, the Brig Bazaar is a 1,300 story in which Holmes deduces Watson is going on a trip to Selkirk. It was written and donated by the author to help the Scottish town of Selkirk raise funds to build a new bridge to replace a wooden bridge washed out in a flood years earlier.

It was published as part of a 48-page pamphlet in 1904. No one knows how many copies were produced, but it does appear that the story (if genuine) had escaped the notice of Holmes historians. This story isn’t mentioned in any of the Holmes bibliographies I found online, nor has it been republished on the 90 years since it was first released.

That last is particularly surprising, given that the estate would surely have republished this story had they know it existed.

What with the publication of a new Dr Suess story, the “discovery” of Harper Lee’s unpublished manuscript by her attorney, and now a Holmes mystery seeing the light of day, 2015 is rapidly turning into the year of the found works.

But while we’re going to have to wait several months to read the new novels, the Holmes story is already online.