The copyright notice and takedown provisions of the DMCA may help creators by shielding sites like Youtube and the Kindle Store from liability, but that same provision can still be used as a weapon to harm authors and other creators. 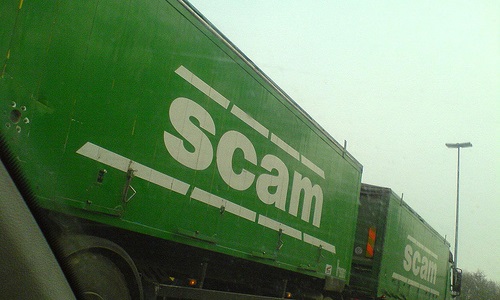 Author Becca Mills posted on Monday about a recent encounter she had had with Amazon’s and Smashwords’ DMCA policies. That encounter has only lasted a few days, so it is more emotionally painful than it is financially painful, but it offers a few useful lessons in how to respond.

Mills reports that on Friday she received an email from Amazon with the bad news that her book Nolander had been pulled from the Kindle Store in response to a DMCA notice. At first she thought it was a mistake,but then she got a similar notice from Smashwords:

I have just unpublished your book Nolander, formerly found here:https://www.smashwords.com/books/view/272292

If you have any questions or can give me critical information about the book, please do.  Per our policy, the book needs to remain unpublished until Smashwords is given consent by both parties to republish it.

The tale is much longer than this, but let me take a moment and point out the first few lessons.

One thing I’ve learned at this point is that both Amazon’s and Smashwords’ DMCA policies are flawed. Neither party forwarded key details from the DMCA notices, thus depriving Mills of any chance to directly rebut the claims made against her work, and Smashwords admitted that they responded based on the weakest of evidence.

Smashword pulled the book based on similarity to a blog post. Given how easy it would be for someone to clip a part of a book, paste it into a blog post, and then set the date back X years, that strikes me as insufficient evidence.

On the other hand, if we look at this from Smashwords’ perspective, it’s not so unreasonable. Ask any group of 10 authors and 4 of them will tell you of horror stories where an author’s work was scraped from their website by a pirate and then uploaded to an ebookstore.

From Smashwords’ perspective there’s no way to tell who actually owns the rights, so they have to take a work down on the flimsiest of claims.

Mills went on to detail the next couple emails she received. After she disputed the DMCA notice with Amazon, she got another email from KDP which finally included contact information from the person who filed the DMCA notice (but no mention of evidence to support the notice).

She also got an email from a helpful “fan” who said that he could fix this for her:

I am Kushal, who posted on your blog with the screen name Kelvin. I have experience with various aspects of online business including DMCA process, hence I thought about contacting you.

Since you are saying that there has been problems both at Amazon and Smashwords, are you sure that it’s a mix-up? That would be quite unlikely. I don’t know about Indie Fiction Authors but in case of Webmasters, YouTubers and Indie Non-Fiction Authors, DMCA process is often abused. Are you sure someone is not deliberately doing this? Anyway, if the problem does not get resolved then you can let me know what Amazon is saying and I will see what can be done.

Paranormal authors with unique story telling angles are damn hard to find, so I don’t want you to go through this. A malicious DMCA attack can end a person’s career (happened with many YouTubers).

While there are fans like this, an out of the blue offer to help should raise red flags, especially when it comes within hours of the DMCA notice.

And Mills is a textbook case as to why. She started looking into the contact email for the DMCA notice, and after spending a few minutes Googling that email address she ended up on a forum where members left these complaints against “Kushal Das” ghost writing service: 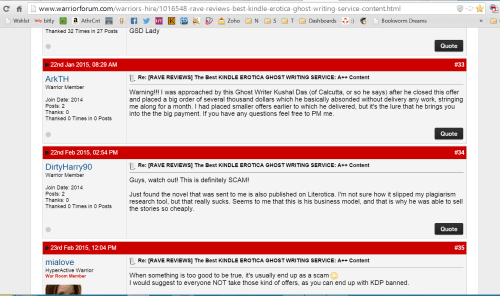 It’s not entirely clear to this blogger what is going on here, but this smells enough like bae (in the correct Danish definition) that I wouldn’t touch Kushal Das with a 10 foot pole.

And so I am passing along a warning. Pirates and/or scammers are targeting indie authors, and you need to be on the lookout. If an offer of help sounds to good to be true, investigate the source before accepting the assistance.

And when you get a DMCA notice, immediately push back. File a counter notice, dispute the claims, and don’t wait for a second to defend yourself.

Correction: The book has been restored at Smashwords, but not Amazon. As of Tuesday morning, the retailer is still sitting on the DMCA counter notice.

Had she simply passively waited, nothing would have happened. And that is the most important lesson here; one cannot win a legal battle if one does not act.