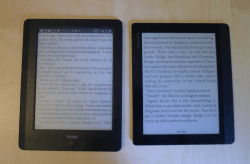 Everyone and their life coach has released a 6″ ereader, but 8″ models are still the rarer than hen’s teeth. I have two different large screen ereaders sitting on my desk right now, and while they have the same screen size and share certain design elements, they could not be more different.

The Inkpad was released late last year by Pocketbook, runs Linux, is little more than an ereader, and is still hard to find,; while the Onyx Boox HDML Plus has been out for just over a month, runs Android, and thus offers the possibility of doing more than just displaying ebooks.

The i86 and the InkPad use the same 8″ Pearl E-ink screen and they have similar lopsided designs, but that is about all they have in common.

The i86 has a black shell with page turn buttons to the left of the screen and a back button below the screen. Its power button, microSD card slot, microUSB port, and headphone jack are on the lower edge. It has a rubberized rear with a slight curve on the rear edges.

As I explained in my review of the InkPad, it has a brown plastic rear shell with a black front. Its page turn buttons are to the right of the screen under a rubber strip. The rear shell has rounded edges and a rubber pad which makes it easier for me to grip the InkPad.

Of the two designs, I’d say the InkPad is prettier for the subtle details. The rubber pads make for a more pleasant feel, and the frontlight is controlled by a swipe bar over the screen.

Speaking of the frontlight, the one on the InkPad is simply better. It’s brighter, whiter, and offers finer control. The frontlight on the i86 is splotchy to the point of being ugly.

With the frontlight off, the i86’s screen (with an IR touchscreen) is slightly more gray/brown than the screen on the InkPad (which has a capacitive touchscreen).  I know that sounds contradictory but it is true.

In terms of battery life, the InkPad lasted a week and the i86 lasted a couple weeks.

The InkPad runs a proprietary version of Linux, while the i86 runs Android 4.0 and comes with Google Play.  In other words, the Inkpad is limited to what it can do out of the box, while with the i86 you have the option of installing apps.

The InkPad does have a few apps of its own, including a web browser, calculator, games, and Dropbox (more details here). But the i86 has Google Play, and enogh space for 14 apps (after that you’ll need to uses the settings menu to move the apps to another part of the internal storage).

Out of the box, both devices support the same basic range of ebook formats, although the InkPad does also have limited support for office doc formats (more details here).  The i86 supports more annotation and formatting options, and they are much easier to access, but on the other hand the i86 does not have a readily accessible TOC in the stock reading app. That’s really beginning to bug me.

They both offer font sizes which range from ones too small for me to read to 72 pt font and beyond, and while they don’t offer the exact same font sizes I did note that both offered specific numbered font sizes. The second photo below shows both ereaders with the font size set to 60.

Both devices can read an ebook to you. The Inkpad sounds pretty good, but the i86 uses the stock Android TTS and sounds terrible (but you can fix that by installing an app).

In terms of page turn speed, the i86 is noticeably faster in the stock app than the InkPad, and still somewhat faster in the 3rd-party apps.

Now that I’ve had the i86ML for a month, I find myself growing increasingly dissatisfied with it. It is in many ways a better device than the InkPad, but as an ereader I just don’t care for it.

The i86 is a little faster at turning the page and I can install more apps, it also has a key shortcoming. The frontlight is crap. It might sound silly to hang a review on such a minor component but I’ve really come to value how a frontlight impacts my reading.

And for that reason I like the InkPad over the i86.

Boox i86 HDML Plus Specs