If you’ve ever browsed a site from a mobile device and been annoyed when pestered to install the site’s app, you’re not alone.

Last Thursday Google released a new report that shows that if there’s one thing that mobile web users hate more than a website bloated with adverts, it’s getting harassed about installing mobile apps.

Google has been tracking how visitors to the mobile version of Google+ respond to suggestions to install the gPlus mobile app. Their analysis found that:

Visitors were seven times more likely to simply abandon the site in disgust than to install the suggested app, and less than a quarter (22%) chose to ignore the prompt and instead go on to read the Google+ page.

Basically, those angry social media posts about the mobile app nag screens are not the exception; they’re the majority. People really are turning away from news sites when the site puts up a full page advert for their mobile app.

According to Google, the solution is rather simple: add a banner at the top of the page. That would obviously annoy fewer visitors, and yet there are still sites that have yet to figure that out.  PC Magazine, for example,  shows me this when I visit their website: 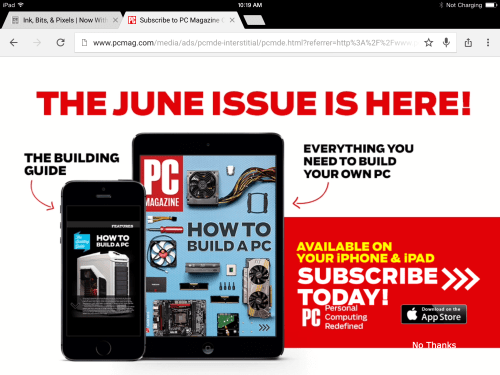 PC Magazine is also on the list of worst offenders when it comes to punishing mobile visitors with a deluge of adverts, so one would expect that they would screw up in another way as well.

It takes time for companies to learn how not to attack their mobile users; this includes Google, which just now nagged me about using Gmail in my iPad’s web browser: 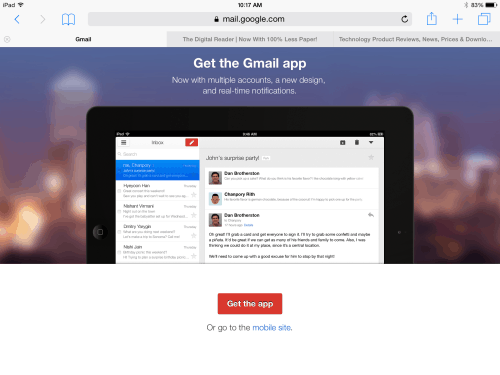 I find this misstep particularly amusing given that Google now ranks websites based on whether they have a mobile-friendly site. Google had previously also dinged sites which redirected mobile visitors to broken sites or otherwise blocked them from accessing the content they were seeking.

And here is Google doing the exact same thing.

Maybe this web publishing thing isn’t so easy after all.