B&N may have announced a month ago that they were withdrawing the Nook Windows 8 app from all markets except the US (and thus abandoning the global ebook market), but someone apparently forgot to tell the Nook customers in the UK.

Hisham El-Far likes to read Nook books on his Windows 8 tablet, but that got a little more difficult a couple days ago when he opened the Nook app and was surprised by this notice: 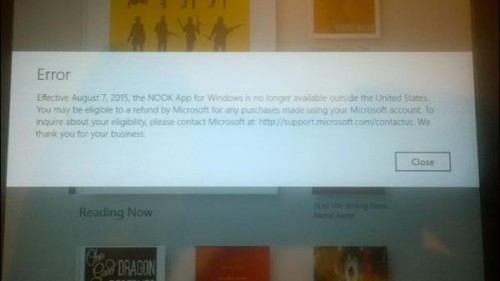 If you can’t read the text in the photo, it says that as of 7 August, the Nook Windows 8 app was no longer available outside the US, and that customers may be eligible for a refund from Microsoft on any ebooks purchased with their Microsoft account.

That closely mirrors the email that B&N sent last month when they announced that they were pulling back from the global book market, so you would think that B&N would have also told its UK customers that they could lose access to their purchases.

Alas, no. Hisham El-Far told me on Twitter that he first learned of this issue on 11 August – four days after B&N withdrew support. He had no advance warning.

And to make matters worse, B&N apparently didn’t even tell anyone in their UK operations that they would cut off access to the Nook Windows 8 app this month. The Nook UK website still mentions the Windows 8 app as I sit here writing this post, and even the Nook UK support account on Twitter was unaware of the fact that the app was no longer supported.

They told their customer:

@HishamElfar We are no longer accepting MS Wallet as payment method, you may need to update your payment information on your NOOK account.

@HishamElfar Pls try signing out and back in. U may also try our other NOOK Reading Apps for IOS and Android. We apologise for inconvenience

While that is factually correct, it is not at all helpful or supportive nor does it solve the problem. A reader should not have to buy an expensive new device after B&N summarily cuts off access to his ebook library.

However, it’s not clear whether B&N really expects that; two days have passed and this issue has still not been resolved. In fact, Nook UK has yet to respond to the first email sent on 11 August.

That is on par with B&N’s usual stellar levels of customer care, but hopefully this post will get their attention.

This screw up is the latest in a series of digital blunders made over the past month. In addition to abandoning its international customers, the retailer has also had numerous problems with the relaunch of its website.

When the site first went live a month ago, the ebook section was effectively nonfunctional, and there were other reports that B&N’s marketplace sellers could not access their accounts and weren’t being paid. The payment issue cropped up again last week, but have reportedly been resolved (again).

With the majority of content sales having gone digital and more physical media sales being made online, this does not bode well for B&N’s future.