Most wearables have a tiny screen (if they have one at all) but Polyera wants to change that. Yesterday this screen tech company revealed the flexible screen it had been working on for the past ten years: 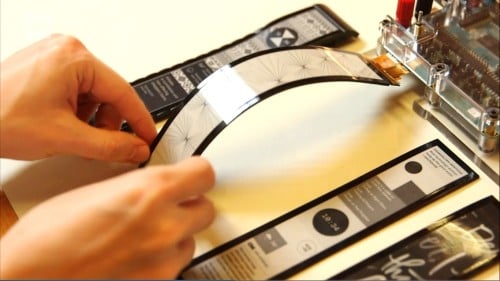 Polyera’s screen combines an E-ink display with a flexible touchscreen and a proprietary backpanel. That backpanel is what gives the screen its flexibility, and it is why this screen tech took ten years to see the light of day.

“The majority of electronic devices we surround ourselves with are what I call ‘rigid bricks,'” said Polyera’s founder and CEO, Phil Inagaki. “And what I thought was that if we could allow these to be softer (and) more flexible, it would allow for all sorts of new experiences and devices to be created.”

Unlike the plastic-based screen tech developed by Plastic Logic and by the late Polymer Vision, Polyera’s screen uses some unnamed proprietary tech which they say is both more flexible and more durable than the competition.

They’ve used the screen to develop the Wove Band, a smartwatch-like wearable with a screen that wraps around your wrist (like the Snapwatch).

The Wove Band  is still under development and has not yet been sighted in the wild. But Polyera is promising to start accepting names for early prototype loans next month, and they’re planning to release it next year.

The company envisions its own system of apps and services which will provide content for the Wove Band. Given what we’ve seen with devices like the Popslate and the InkCase Plus (neither of which lived up to their promises for software), that is probably not going to happen.

But at least the screen tech looks cool in this video: