So, you’ve just gotten a new Fire tablet—as part of the Black Friday sale, for Christmas, your birthday, or what-have-you—and now you’re ready to put some apps on it. What’s out there that’s any good?

Well, as it happens, a lot of apps out there are really good—especially the ones from the Google Play Store, which you can install onto your Fire surprisingly easily. But let’s say you don’t want to mess with that right now, and just want to know what’s on the Amazon Appstore. Well, here are a few suggestions for useful applications.

Browsing from the Desktop 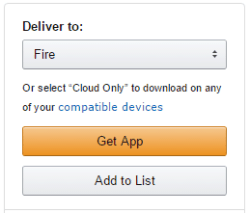 First of all, the best way to browse and search the Amazon Appstore if you’re being serious about it is from the desktop. The larger screen, better interface, and handy keyboard will make it easier to find what you need than trying to rummage through it directly from the Fire. There’s just one little drawback.

If you’re browsing the Amazon store to find some good applications, you should be aware that not every app on the Amazon Appstore can be installed to the Fire. Amazon is notably finicky about allowing competing e-book readers on its tablet—so even when it carries them, and even if they would otherwise be compatible if you installed them directly, it won’t let you put them on your Fire. (If you want them, you’ll just have to sideload the Play Store and get them from there.) But how can you tell if an app is available?

If you have your Fire registered to your Amazon account, it’s really quite simple. In the upper right corner of a given app’s page, there will be a box that shows compatibility with your devices, and a “Deliver to:” option that may list your Fire in it. If you see “Deliver to: Fire,” then you know the application is compatible (and you can go ahead and install it to your tablet from that very page, in fact). If it’s not there, then this app won’t work for you and you’ll have to find another one. This won’t work unless your Fire is already registered to you, though, so set that up before you start app-shopping.

If you’re looking for e-book readers (other than the admittedly-excellent built-in Kindle apps), well…as I said above, there really aren’t many. Search on any e-reader app—FBReader, Aldiko, UB, Moon+—and when you pull up their page, there will be a big red X next to “Fire” in the device compatibility listing. It’s not because they actually aren’t compatible—if you install them from the Play Store, they’ll work just fine—but Amazon doesn’t want the competition on its own devices. About the only ones that you’ll find are ones that read things that aren’t exactly e-books—for example, Adobe Acrobat DC, which reads PDF files. And as has been mentioned before, the OverDrive app will install, because it can check out e-books from libraries.

If you search on “EPUB” and poke around, you’ll find the occasional app that slips through the cracks, like “EBook Reader & PDF Reader,” but none of the well-known ones are available, and since that one only gets a two-star review ranking, it’s probably not even very good.

If you’re looking for alternatives after adding the Play Store, Paul’s post on Black Friday ereader app choices is a good place to start.

My favorite RSS reader, Press, isn’t listed as compatible with the Fire (though it works just fine if you install it from the Play Store). However, Feedly does have a reasonably useful Android version available for the Fire, which will do if you can’t find something better. Flipboard also has a Fire version, which looks great. (I’d also recommend Zite, but that service is shutting down in a couple of weeks, so there’s not much point.)

Your Fire already comes with the Amazon Video player pre-installed, for watching the videos you get as part of your Amazon Prime membership. But Amazon does also allow at least somecompetitors into its Appstore. Netflix works on the Fire, as does Hulu. If you like The Flash andArrow, you might want to add The CW. If you watch Agents of S.H.I.E.L.D., you’ll want ABC. (Though all three shows are available on Hulu, too.)

Unfortunately, other apps like the Crunchyroll anime streaming service or the Rooster Teeth app for watching RWBY are listed as incompatible with the Fire. And as for YouTube, don’t even think about it; the most you can find is a shortcut to the mobile version of the YouTube web page. (But if you sideload the Play Store, you’ll find all three of those will download to and run on your Fire just fine.) But then, even viewing videos through the Silk web browser works surprisingly well.

Another great video app that’s available from the Amazon Appstore is Plex, which will let you stream movie files from your computer’s hard drive for viewing on your Fire or other tablets. I have friends who set up entire media servers for use with this app. It might be useful for you, too.

A lot of the familiar standby apps are here: Twitter, Facebook, Tumblr, and so on. It’s worth noting, though, that not all social networks are reflected. Instagram doesn’t have a version out for the Fire, and the only available clients for it don’t support the full range of features. Likewise, Google Plus. If you’re looking for those, best look to the Play Store instead.

Facebook Messenger is available, as is the multi-message client IM+. IM+ supports Google Hangouts instant messaging one-to-one, but not multi-user chat hangouts. The original Google Hangouts is, of course, absent, being a Google app that requires access to the Google Play Store to install. And don’t forget about Skype, which can use the user-facing camera to do videophone communication. (Imagine that—video communication on a $50 device, or $35 if you got it on Black Friday. My, how far we’ve come.)

There are many, many more games than I can shake a stick at that will work reasonably well on your Fire. (Though bear in mind that the ones with really fancy graphics might run a bit slowly.) I play a lot of Hearthstone: Heroes of Warcraft lately, a nifty little free-to-play digital CCG with in-app purchases. Plants vs. Zombies is a fun little game for 99 cents, though if you’ve already bought it elsewhere you might not want to spend the money on it again. (Plants vs. Zombies 2, however, is only available from the Play Store, and it would probably take up far too much space and run exceedingly slowly on the Fire anyway.) A free version of Zombie Gunship is a lot of fun, too.

And speaking of zombies, Dead Trigger and Dead Trigger 2 are available for the Fire; they’re decently fun little shooters though the in-app-purchases get more than a little daunting, especially in DT2. There’s also a version of Ingress available, though I’m not sure why they charge $1.99 for it when it’s free in the Play Store. (And it might not be the most fun played via the Fire anyway, given that the Fire doesn’t have GPS positioning so its location estimates are often inexact.) Do you like board games? How about the official Android version of Settlers of Catan (pictured above with the next-most-portable version of the board game for comparison) for $3.99?

There are so many games in so many different categories that you’d probably be best off just searching for your style or genre preference. You’re likely to find something there that will suit you, especially if you try poking around in the “Actually Free” Amazon Underground section.

If you like swipe-to-type keyboards, you’re in luck: there’s a free version of Swype available, and one for 99 cents with a few more features. (Of course, if you’ve already bought it through the Play Store, you might just want to sideload and grab that version instead.) If you want to manage files on your SD card, there’s a free version of ES File Explorer. (Over at Teleread Paul has had some problems with that app, but his recommended replacement, File Expert HD, doesn’t seem to be available for the Fire from Amazon, so you’d have to get that from the Play Store instead. File Manager is another alternative.)

Even if you don’t choose to add the Play Store, the above listings demonstrate that there are still plenty of good app choices you can play around with. The Fire is a remarkably good little machine for the money. Yes, it doesn’t cost a lot, and it is cheaply made in some ways, but generally the cheapness isn’t in areas that will get in the way of using it for day-to-day tablet purposes.

So, now that I’ve given a few of my favorites, what are your favorite Fire-compatible apps from the Amazon Appstore?

reposted with permission from Teleread