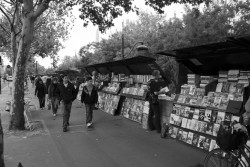 Thanks to a couple court rulings, it’s currently as legal to resell ebooks in the Netherlands as it is to resell music in the US, but that doesn’t mean that publishers are happy about the situation.

Now someone (it’s not clear who) is sending sellers of used ebooks threatening letters, and is accusing them of committing a felony. The sellers are being threatened with jail time, and fines up to 19,500 euros.

TorrentFreak beat me to the story, and published a report which left out about half of the important details:

With this kind of opposition in mind it was no surprise that yesterday several media outlets began reporting that sellers of used eBooks in the Netherlands had received legal threats from aggressive copyright holders.

In an email titled “Illegal dissemination of digital books”, sellers of pre-owned eBooks were warned, apparently by Dutch anti-piracy outfit BREIN, that their activities were illegal.

“The Brein Foundation acts against piracy of music, film, interactive software and digital books on behalf of rights and stakeholders such as authors, performers, publishers, producers and distributors,” the email begins.

“We’ve detected that you are distributing digital books without permission being granted by the copyright holders. This practice is unlawful towards the rights-holders and if you infringe you are liable for the damage they suffer as a result.”

I’ve looked into this myself, and I can add a couple details.

One, the operators of the used ebook marketplace Tom Kabinet are aware of the story. A rep told me that “I have seen the article but have no clue on who is sending the emails. Our sellers haven’t received any so far, as far as I know.”

Two, the Dutch anti-piracy outfit Brein has vehemently and rudely denied sending the emails (or at least that’s the impression I get from reading the Dutch-language tweets from a Brein rep).

That was puzzling until I dug a little further and learned that the threatening emails were being sent through a site called marktplaats.nl. This is the Dutch equivalent of Ebay, which leads me to conclude that anyone who got the email may have been selling ebooks on the site.

The subject line of the one email I saw mentions a Dutch book from 2012, which was probably the book being sold. However, I didn’t find that ebook for sale on the site, so I can’t say for sure.

Three, I also can’t say who is sending the emails. Nos.nl reported thatMarktplaats.nl was trying to find out who sent the mail. The site told Nos.nl that Brein was actively trying to prevent the sale of second ebooks, and that therefore hardly any ebooks were being sold on the site.

Brein has a reputation for threats and bluster, but they’ve never in the past denied sending a threatening letter. That raises doubts that they are behind this email, and without additional detail there’s no way to know for sure.

So at this point we don’t know if this is a valid legal threat, a publisher trying to scare consumers, Brein’s left hand not knowing what the right hand is up to, or if this is some type of scam or shakedown operation (a la RightsCorp).

In the absence of new information, I lean towards the last option.

In any case, the issue of used ebook sales will be back in Dutch courts next week. The publishers are appealing the January 2015 ruling which said that Dutch consumers could resell ebooks, no matter what the license agreement said.

We won’t be hearing about the results f this court battle for several months, but I will report on it when it is handed down.