First introduced in October, the Icarus Illumina XL is an eight-inch ebook reader which runs Android 4.2.

It’s powered by a dual-core 1GHz CPU with 512MB RAM, and 8GB storage. It also has a microSD card slot, Wifi, and a headphone jack for audio. Its screen measures 8″, and includes both a touchscreen and a frontlight. It’s a "knockoff" epaper screen with a screen resolution of 1024 x 768.

It’s still not widely available,  but the Illumina XL went up for pre-order in October before going through a failed crowd-funding campaign on Indiegogo. between one and the other, Icarus has gathered enough funding to place a small order from the Chinese manufacturer.

Those units are about to ship to customers, and in order to build more interest in the Illumina XL, Icarus has posted the following video. (Thanks, Joel, for the tip!)

The video looks like it was shot with someone’s smartphone, and it clearly shows that the software running on the Illumina XL was written by the Chinese OEM Boyue. It goes through all the basic features, and about three minutes in the video shows that you can install Android apps like Kobo, Dropbox, and Kindle (there’s no direct access to Google Play, however).

All in all it’s a great Android ereader, and if it had better screen I would heartily recommend it. But the screen is rather low-res, which is why I find it hard to justify the Illumina XL’s 200 euro price tag. 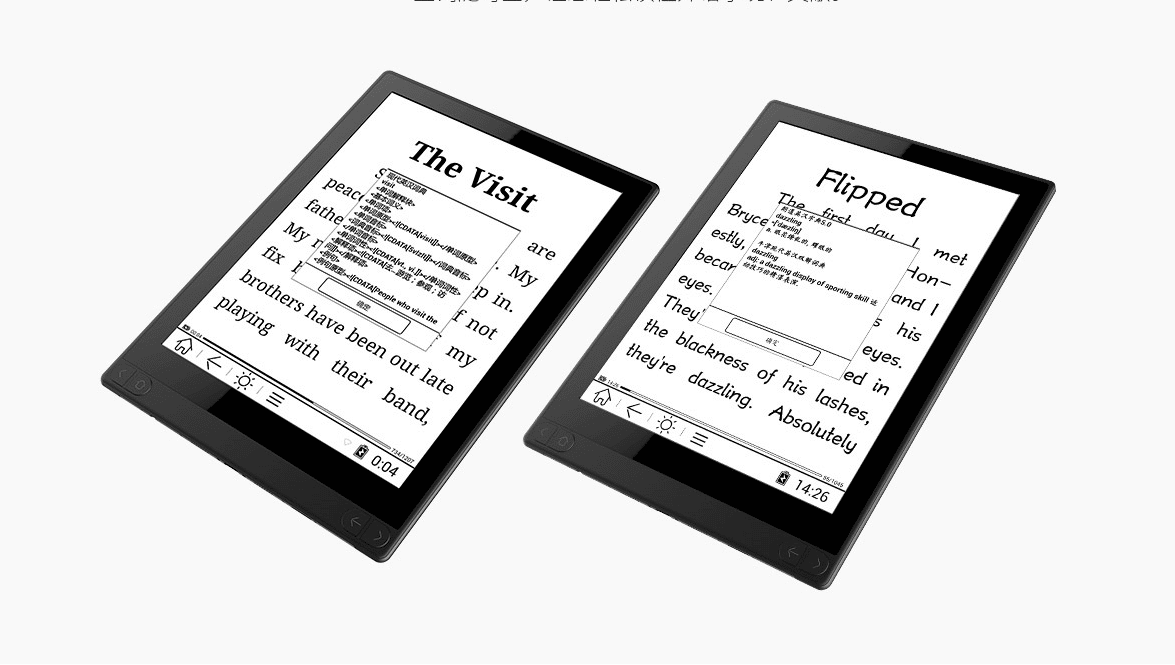 Hi Nate.
Do you think an 8 inch e-reader with a HD Carta screen will come anytime soon?
I’ve been holding off buying the Kobo Aura H2o, waiting for a replacement or a similar product in 8 inches, but it seems it is not coming.

We won’t have a higher resolution screen until someone invests in the development. E-ink won’t do that unless they have a customer, so unless and until Amazon wants that screen size for the next Kindle it simply isn’t going to happen.

If not for the low res I would be very interested. Ilona text to speech, those stats were near perfect. That screen res is a deal breaker.

Thanks.
I didn’t know new technology would have to be developed, I assumed they could just use the existing tech for the smaller e-readers and "scale it up".

Too bad E-ink has no competition, they seem pretty complacent with the current situation. Some competition could move the technology forward.

I suspect that eInk will get around to it eventually, as it is more of an evolutionary technological change (given that they already do Carta and big screens, separately) than revolutionary. But Nate is right that without Amazon pushing it, it is unlikely to be a priority for them (so is likely to wait for a gap between more important priorities for it to happen).

On the Illumina, I don’t see it making much headway against existing, higher resolution, 8″ models (e.g. the Onyx Box i86). Is there really a significant market for a 'budget' large eReader (I’d generally seen large eReaders as a 'premium' niche)?

Well, it doesn’t actually have to be Amazon; that was simply an assumption I made based on the point that I don’t know of another device maker that sells enough ereaders to justify the investment (and Sony is only wasteful to a point, so the odds are against them funding development).

So it’s really Amazon or nothing.

Hi Nate,
I was wondering if you could make a video review of the new upgraded Cybook Ocean 8″?

I don’t have one, and after my past experiences with Bookeen i would not buy from them ever again.

Nate: I was making, and think I can justify, a similar assumption. Only Amazon could generate sufficient sales for a niche/premium eReader to make it worth eInk’s while to make it a priority (I suspect that even lesser brands' *main* eReader would probably only generate the same order of sales as Amazon’s niche offerings).

eInk has every reason to put all their effort into keeping the Amazon golden goose happy, and the rest of the market is simply riding Amazon’s coattails. Some of may be disappointed in Amazon’s (and thus eInk’s) priorities (not me just at this moment, I’m in love with the idea of a 300dpi 6″ 🙂 ), but we should remember what eReaders would have been like without Amazon bringing large bucks for R&D.

I was one of the Indiegogo backers of this device, which I received just before Christmas. I enjoy the reading experience on the device; while the screen is low resolution, I find it better than the raw specs suggest. I also briefly owned the higher specced Onyx Boox M86 plus, but found the screen not as good, and the software was terribly unstable and quickly unusable. So overall I am pleased with the Icarus Illumina XL.

I purchased this one, and i’m very regret for that…. the reading experience is very bad, very low resolution, so many problems in books that written from right to left language like Hebrew, Very slow interactive, The Battery consumed very quickly, (it may finish within a day if you forget the WiFi open), Sometimes the Apps hanging, The earphone input is not working well, you will see shadow from the previous page which make your reading experience in very bad …… I didn’t read since i Got it.
When I talked to support team, they ask you to send it back to check the device ( by this i will pay more than 100 euro shippment fees) !!!

I advise anyone to not waste their money….. I’m now going to purchase Kindle, yes its very small screen, but you will really enjoy reading by it.

[…] of people who had bought one either through the Indiegogo campaign or direct from Icarus (one even posted a video).  The reviews are generally positive, although pretty much everyone agreed that the so-called […]